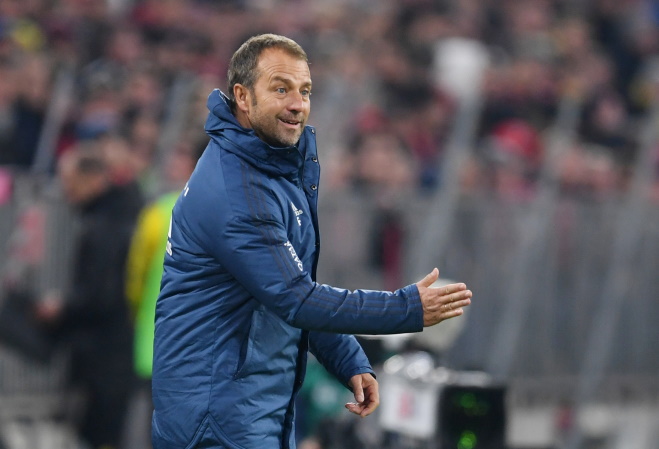 Bayern Munich have confirmed that Hansi Flick will remain in charge until at least Christmas, but are the Bavarians waiting for someone else?

Following the departure of Niko Kovac a number of top names have been linked with the vacant position, one of the top jobs in European football, but for one reason or another the job has not been filled.

That would suggest that free agents such as Jose Mourinho and Massimiliano Allegri do not fit the bill.

Whether that be the decision of Bayern or the men involved, no-one knows, but if it was to happen it would surely have happened by now.

A big case can be made for Bayern holding out for a manager who is already employed by another club and is going nowhere for now, but could be free at some point down the line.

Pep Guardiola has been mentioned, but a return to the Allianz Arena looks highly unlikely and certainly would not happen before the end of the season.

However the position of another top target, Mauricio Pochettino, is a bit more fragile and there is a chance he could be available soon.

"#Flick has an impressive vision for tactics and training. He has a great relationship with the players and we like his measured approach."

Despite insisting he is happy at Tottenham, all has not been well this season and rumours have been rife suggesting he could walk or be axed. Either way, it is by no means certain Pochettino will still be in charge come Christmas and Bayern may be waiting to see what develops.

Erik Ten Hag is another to be heavily linked with Bayern as he continues to do an outstanding job with Ajax, but like Guardiola, it would be a huge surprise if he left before the season was out.

All in all, the decision to give Flick the job until Christmas seems to be a wise move by Bayern officials, one that bides them plenty of time.

And who is to say that Flick is not a big contender himself and the next few months is a test to see if he has what it takes to fill the position long term.

Bayern have won their two games under Flick including the 4-0 Der Klassiker win over Borussia Dortmund last weekend and chief executive Karl-Heinz Rummenigge has spoken glowingly about him.

“He has an impressive idea of training and tactics,” said Rummenigge. “He is very good with the players. I say with conviction: We trust Hansi Flick.”

That is a clear sign that he may not be keeping the position warm and has a real chance to make it his own if he continues to shine for the next few months.