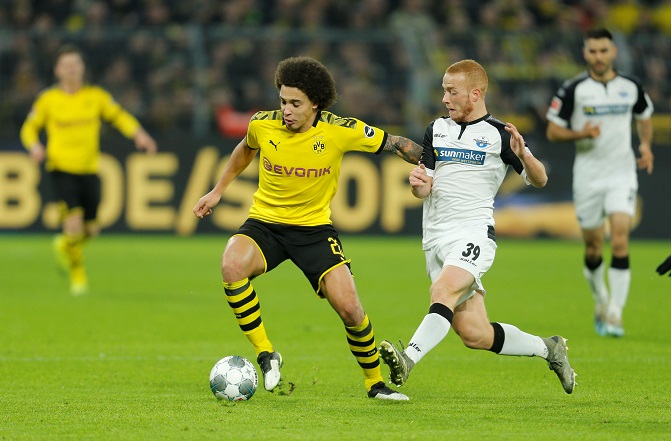 Borussia Dortmund coach Lucien Favre has revealed Axel Witsel will be out of action for the rest of the month after falling at home.

Belgium international Witsel has been a key figure for Dortmund this season, missing just one of the 14 Bundesliga matches to date, but an incident at home means he will not be available for selection for the rest of December.

After impressing in the 5-0 home victory over Fortuna Dusseldorf on Saturday, the 30-year-old returned to his home only to suffer a heavy fall later on, which resulted in him spending both Saturday and Sunday in hospital to deal with the injuries.

Favre revealed he was told about the matter on Sunday morning and although Witsel returned to his house on Monday, he will not be seen in action until 2020 as he recovers from the fall.

“Witsel sadly will be out for the rest of this year,” he said at news conference ahead of Tuesday’s Champions League match against Slavia Prague. “But there is one positive thing: He’s already back home.

“We can’t change it now. It’s a shame for him, a shame for us. He’s one of the most important players for us.”

Witsel, who is expected to be part of Belgium’s Euro 2020 squad, will miss BVB’s remaining four games in December, starting with a Champions League clash at home to Slavia Prague on Tuesday before three important Bundesliga encounters against Mainz, RB Leipzig and Hoffenheim.

Dortmund, who are chasing a first league title since the 2011/12 campaign when Jurgen Klopp was in charge, are sitting third in the standings after Saturday’s impressive victory, five points behind leaders Borussia Monchengladbach.