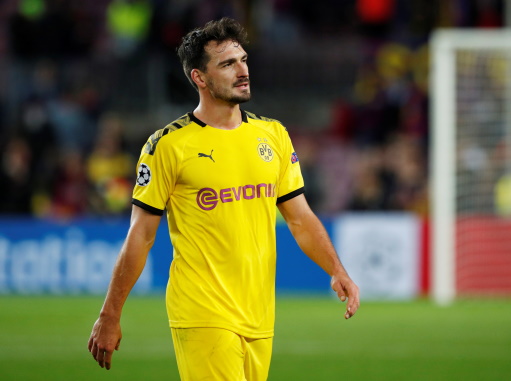 BVB secured a 2-1 triumph over Gladbach as Jadon Sancho provided a record-equalling 15th assist of the campaign for Achraf Hakimi to bag the winner on 70 minutes.

Thorgan Hazard scored the opener with just eight minutes on the clock while Lars Stindl levelled for the hosts five minutes after the interval.

The result means Dortmund are now second in the Bundesliga standings, just one point behind a Bayern Munich side who face Augsburg on Sunday to make up their game in hand.

15 – Jadon Sancho has assisted 15 goals in the Bundesliga this season for Borussia Dortmund – the last Englishman to assist as many league goals in a single campaign within Europe's top five divisions was Frank Lampard in 2004-05 with Chelsea (18 assists). Special. pic.twitter.com/vV3g7dN5En

RB Leipzig’s goalless draw at Wolfsburg means they are just one point adrift of Dortmund in third, with the race for the German top-flight title set to go right to the wire.

Lucien Favre’s side have now won four consecutive league games and Hummels believes the turnaround in fortunes had been aided by a new fighting spirt, with January recruits Emre Can and Erling Braut Haland leading the way.

“We got stuck into the challenges. We didn’t let them do as they pleased,” he told the club’s official website. “That wouldn’t have been the case a few weeks ago.

“It’s a mentality that we’re gradually managing to instil in training; Emre and Erling are making a major contribution to this with their way of playing.”

Next up for the Westfalenstadion outfit is Wednesday’s Champions League last-16 second-leg clash with Paris Saint Germain at the Parc des Princes.

The Germans hold a 2-1 advantage but know they face a real battle to progress to the quarter-finals.