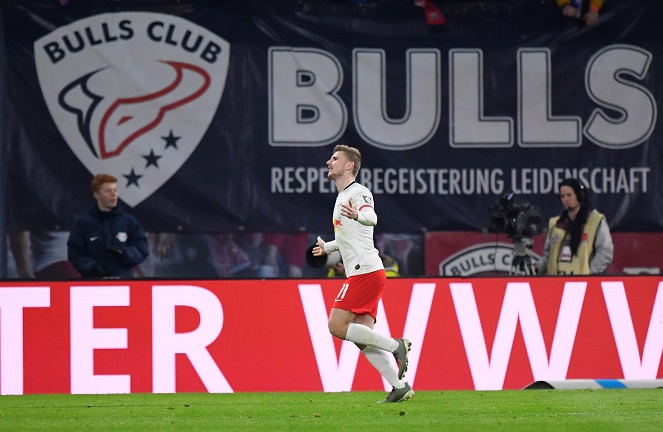 RB Leipzig forward Timo Werner has revealed his admiration for the Premier League as speculation over his future continues.

The Germany international forward has been in majestic form for Julian Nagelsmann’s side this season, scoring 25 goals in 28 matches in all competitions.

He is currently the second top scorer in the division, two goals adrift of Robert Lewandowski, and has consistently been in good form for Leipzig in his four years at the Red Bull Arena.

This season has seen speculation arise regarding his future at the club, with several big moves potentially spoken about.

A switch to Liverpool is allegedly high on the agenda, with Jurgen Klopp thought to be a big admirer of the pacy 23-year-old.

And the former Stuttgart forward has not exactly done much to quell any further links after admitting a move to the Premier League would be tempting at some point in the future.

The striker told reporters he could see himself playing outside Germany at some point during his career.

“I can generally imagine playing abroad one day although I don’t have any specific club where I want to be,” he said.

“I am open to everything. I was over in America for a holiday recently and English football was on all of the time. That’s an exclamation mark for the Premier League. But there are also big, famous clubs and it would certainly be fun playing there.”

Werner penned a new contract at Leipzig at the beginning of the season, committing himself to the end of the 2022-23 season.

Reports afterwards suggested the deal included an “affordable” release clause although the exact amount was not disclosed.

Leipzig, who are aiming to win their first Bundesliga title this season, were knocked off top spot by Bayern Munich at the weekend after drawing at home to Borussia Monchengladbach.