Mounie happy with his role at Huddersfield Town 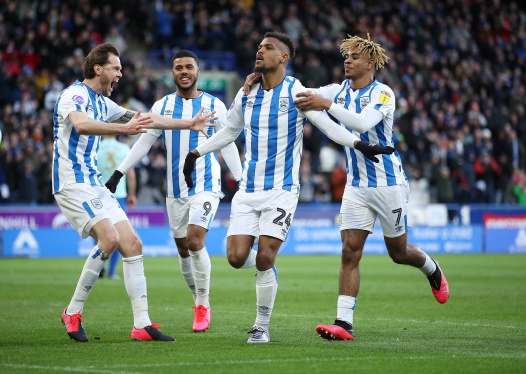 Huddersfield Town striker Steve Mounie says the competition for places at the club is bringing the best out of him and his team-mates this season.

Danny Cowley’s side eased fears of relegation after they thumped Charlton Athletic 4-0 on Saturday afternoon.

The Terriers have now won back-to-back matches to move five points clear of the bottom three, with Middlesbrough, Barnsley and Luton Town occupying the relegation places.

Huddersfield beat Bristol City on February 25, and their recent form means Meunier has been dropped to the bench.

Meunier has made 22 appearances so far this season, and he grabbed his eighth goal after stepping off the bench to score the second goal against Charlton.

Coach Cowley currently has Elias Kachunga, Collin Quaner, Fraizer Campbell, Grant and Mounier at his disposal and the latter says the mood in the camp is good as they all try to work together to try and help the club avoid the drop.

Mounier told the Huddersfield Examiner: “We have a strong bench, and it brings competition.

“Everyone now is focused in one direction and is pushing each other to another level. Especially when you start from the bench, you try to score a goal and help the team as much as you can.

“So yes, I’m happy to help the team as much as I can. I knew I could score in this league. I didn’t have the chances at the beginning of the season. When I got the chance, I proved I could play and score goals.”

Huddersfield are next in action on Saturday when they travel to local rivals Leeds United before they then take on fellow relegation rivals Wigan Athletic on March 14.