Goals that never were (or never should have been) 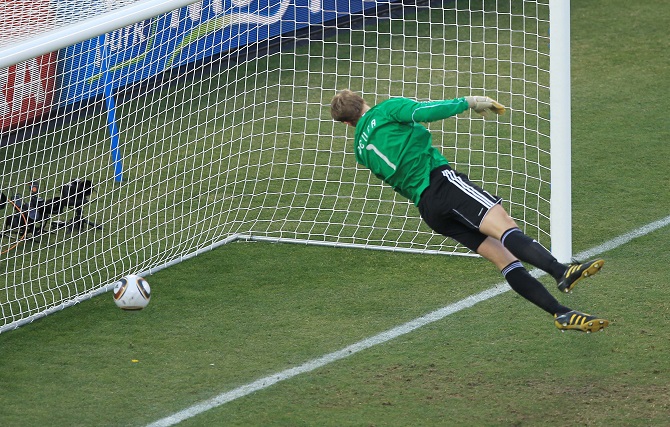 Scoring a goal is the best feeling in football so it must be awful for players when their seemingly legitimate strikes are disallowed.

Referees have an difficult job. They have to keep up with the pace of a game and make split-second judgments, all while being hounded and abused by the more tribal sections of the terraces. ‘Who’d be a ref?’ as the old adage goes.

The men in the middle are scrutinised no more than during contentious goal decisions, whether they have been awarded or disallowed.

Sometimes, bizarre decisions are made by the officials, whether they are to the letter of the law or not.  Here are some of the oddest calls.

Stormy weather has battered the UK in recent weeks and football has felt the effect. Long balls are swirling around everywhere and putting defenders and goalkeepers off alike.

Even placing the ball down to take a set-piece has become tricky with balls rolling away from players just as they prepare to step up to take an all-important free kick or corner.

The ball rolled back slightly towards him before he whipped in a perfect delivery which was nodded home by defender Worrall.

However, as the ball wasn’t technically “dead”, the goal was ruled out to much frustration at the City Ground where the match ended goalless.

A Merseyside derby is probably not the right occasion for any referee to become embroiled in controversy, but Graham Poll was centre-stage at the full-time whistle.

Reds keeper Sander Westerveld took a quick free kick in the dying embers of the game with the match goalless.

His punt forward cannoned off the back of Hutchison and somehow ended up in the back of the net.

Poll blew his whistle for full-time just as Westerveld struck the ball and the goal did not stand, a decision which angered those of a Toffees persuasion.

The ultimate kick in the ribs for any England fan saw Frank Lampard’s long-range strike cross the goal-line after hitting the crossbar, by the proverbial “country mile” – yet, quite astonishingly, was not spotted by the assistant referee.

England, under Italian boss Fabio Capello, were atrocious throughout the South Africa 2010 World Cup, but that goal from Lampard seemed to momentarily inject some spark into the Three Lions.

Perhaps the lingering anger in the England camp was to blame, but Germany ended up steamrollering Capello’s men 4-1 to advance to the quarter-finals, in a match also remembered for Gareth Barry making Mesut Ozil look like Adama Traore.

Telly pundit everyman and Homes Under The Hammer presenter Dion Dublin was a pretty handy goal scorer back in the day.

He was the joint top scorer in the 1997-98 season with 18 Premier League goals for the Sky Blues, one of which took “poacher’s instinct” to the nth degree.

Dublin attempted to head a cross goalwards but Newcastle keeper Shay Given claimed the ball and the forward’s momentum saw him run into touch.

However, Given did not check his surroundings and a second after placing the ball on the ground, Dublin snuck up behind him and tapped the ball into an empty net, to the laughter of Highfield Road.

The referee checked with his linesman before awarding the goal. In fairness, this was simply great opportunism.

The most farcical “goal” in the history of football. It’s almost impossible to describe using words.

Somehow, linesman Nigel Bannister thought the ball had crossed the line in between the post, which if I remember correctly is the criteria for a goal to be scored.

It must have been a challenge for those working the videprinter to determine who to award the goal to with the Hornets’ John Eustace the unlucky recipient.

“Like a UFO landing,” was the summation from then-Watford boss Aidy Boothroyd. He wasn’t wrong.