Brunt ready to bow out in style at West Brom 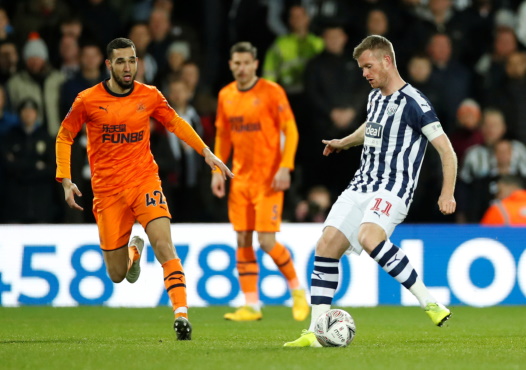 West Brom winger Chris Brunt says he will do all he can to get the club promoted this season before a likely summer exit.

The 35-year-old has been at The Hawthorns since 2007 and has made over 400 appearances for the Baggies in that time.

Brunt has scored 48 goals since he moved to the Midlands 13 years ago and he will be hoping to add to that tally before the end of the Championship campaign.

He started Tuesday’s 3-2 defeat to Newcastle United in the FA Cup, but that was one of his rare opportunities this season.

Brunt has only made nine appearances all season, with five of them coming in second tier.

The former Northern Ireland international is out of contract in four months, and he expects to be moving onto pastures new before the start of the 2020/21 season.

Even though he needs to start thinking about his own situation, Brunt says getting the club promoted is the only thing on his mind.

“Obviously I don’t overly expect to be at West Brom next season based on this season, but you know strange things happen in football,” he told the Express and Star.

“I think I have had a good run at it here and I have thoroughly enjoyed it. Hopefully, we can go out with promotion and hopefully I can play a little bit of a part in it.

“I think we can all get together and have one last push to get over the line. I will take stock and see where we end up. But I doubt very much that I will be here next year.”

West Brom have a one-point lead at the top of the Championship table, and they are next in action against Swansea City on Saturday.