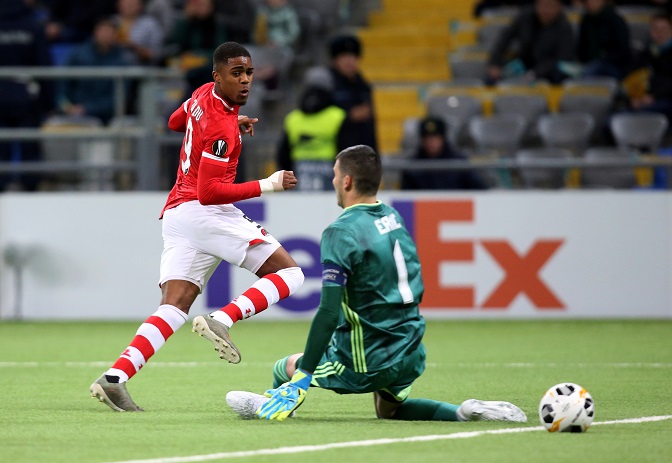 Myron Boadu says he is hopeful of securing qualification to the Champions League this season with AZ Alkmaar.

The Dutch outfit are currently second in the Eredivisie table after an encouraging start to the season under Arne Slot.

So far, they have only lost two of their 14 top-flight games this season, and they lie six points adrift of leaders Ajax in the table.

However, they are comfortably ahead of PSV Eindhoven, who have struggled under Mark van Bommel this season, after narrowly losing out on the title last year.

AZ won 4-0 win away at PSV in October, when Boadu scored the opening two goals before Jonas Svensson and Dani de Wit completed the rout.

The Alkmaar outfit are five points ahead of PSV and if they keep that form up then they will enter the qualifying stages in next season’s Champions League during the summer.

And, the 18-year-old is hopeful they can continue their rich vein of form to reach Europe’s premier competition for the first time since the 2009-10 campaign and is also refusing to rule out a title charge.

Speaking to De Telegraaf, Boadu said “We can gradually think of second place. In fact, we go for that place. We want to win many more matches. Whether a title is realistic? We can only say that after the match against Ajax in mid-December. Then we know how we stand, the gap is three or nine points. “

“That would be great for the club. We want to do everything we can to achieve that. It is still far away, but a little dream is allowed. More dreams have come true lately.”

Boadu has been one of the stars of AZ’s season so far despite his tender age, netting 16 goals in 24 games, and has found the net in each of his last seven appearances.

He also debuted for the Netherlands senior team against Estonia last week and marked the occasion with a goal in the 5-0 win.