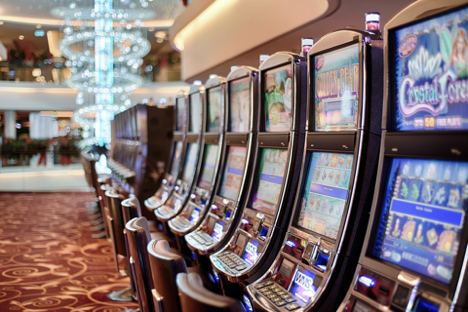 Themed games have been a staple of casinos for years, attracting players with the opportunity to enjoy their passions for music and sport while gambling.

You can play a Lord of The Rings game or even a Guns n Roses slot machine. Football fans have also been catered for having several options, and it gets even better during the time of the World Cup.

Just like real casinos have themed slot machines and games, online casinos have similar options to spend your time and money on. Online casinos are fast becoming a go-to option for a lot of gamblers because one can play without leaving the comfort of one’s armchair.

There are hundreds of options for online casinos and here are some new options for UK players. The UK’s love of football means the beautiful game has often been used as a muse for game designers. To narrow down the options, we have come up with a list of great football theme casino games that you can check out.

A simple name for a simple game, Football Star was developed by Microgaming and is a very popular slot game that uses the stars of European football on the reel. The game has three reels and over 200 ways to win.

Football Frenzy is another great slot machine game but with four rows. This one has been developed by Real Time Gaming and is known to provide hours of fun.

Top Card is a live football-themed card game which also accepts Bitcoin as currency. During the World Cup, the game also provides real time updates from the matches happening so you don’t even have to miss your favourite game while playing.

Champions Cup is a popular slot game that has been developed by NetEnt. This is a high volatility game so it’s recommended to those who want to be on the edge of their seat for hours on end. The graphics and visual experience is noteworthy with a huge football stadium where the audience is cheering you on. Champions Cup is even popular in countries like India where real casinos are mostly banned. In fact, online gambling in India is really gaining a lot of traction.

Football Fever is a great slot game developed by NextGen gaming and has five reels. There is also an option of Super Bet which gives you the chance of winning more money than usual. The game is known to be secure which is a point of concern, especially after news that some of these online slot games could be hacked, as described in this article.

These are just some of the more popular football slot options for you to check out across various online casinos. A lot of football fans prefer betting exchanges to put their money on their favourite players. This obviously requires deeper understanding of the match unlike casinos where you can also count on luck.