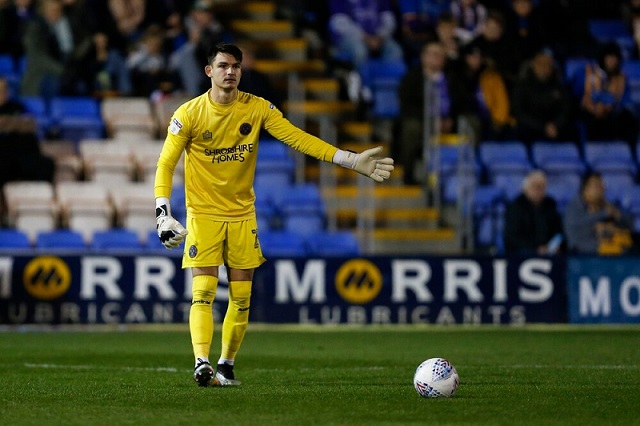 Republic of Ireland boss Mick McCarthy says Shrewsbury goalkeeper Max O’Leary is a good prospect and could be handed an international call up.

The 23-year-old stopper is currently on loan at the Shrews from Bristol City, where he progressed through the academy.

His form at Shrewsbury has been impressive, keeping nine clean sheets this season as Sam Ricketts’ side have conceded the fewest number of goals in the bottom half of the League One table.

Now, it has emerged that McCarthy went to go watch him in action during their 2-0 defeat away at Portsmouth on Saturday.

Despite being born in Bath, O’Leary is eligible to play for the Republic of Ireland through his Kerry-born grandfather.

With Ireland struggling for depth in between the sticks, McCarthy is keen to keep an eye on as many goalkeepers as possible.

Can we all just take a moment to appreciate this save from Max seconds before we went up the other end and scored! 😅 @maxoleary10 #Salop pic.twitter.com/oh3XOLAdLw

Even though O’Leary conceded two goals at Fratton Park, McCarthy left suitably impressed and says he could be part of the squad if he continues to perform well.

In a scouting report released by the Irish FA, the 61-year-old said: “Getting to see Max O’Leary was a bonus.

“Max trained with us in Portugal in the summer while he sorted out his paperwork and while he could do nothing about the two goals on Saturday, he looks a good goalkeeping prospect.”

In the same match, the Republic manager was also able to cast his eyes on two Pompey players in Ronan Curtis and Marcus Harness.

Winger Curtis has been part of the setup since September 2018 and has won three senior caps.

Fellow wide man Harness, like O’Leary, has never played international football but is eligible for Ireland despite being English-born.