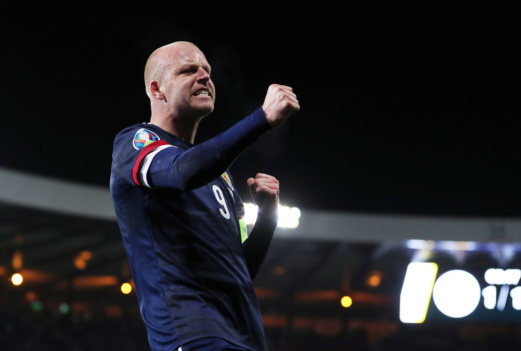 Steve Clarke’s men failed to qualify for the tournament group stages, but they will still get a second chance after a successful UEFA Nations League campaign.

Scotland are next in action in March when they face Israel in the play-offs, with the winner set to take on either Norway and Serbia for a place at Euro 2020.

Miller’s Scotland days are over, with the former Rangers ace winning the last of his 69 caps in 2013. Clarke currently has Naismith, Oliver McBurnie, Eamonn Brophy and Lawrence Shankland as his forward options.

Naismith has only started six times for Hearts this season, and he is currently nursing a hamstring injury after going down injured in the 2-1 defeat to Hamilton Academical on December 21.

Tickets for our UEFA #EURO2020 play-off match against Israel at Hampden will go on general sale at midday on Thursday, 9 January 2020.

Prices start at just £5 for kids and concessions.

He still has plenty of time to recover and prove his fitness and Miller has backed him to shine for Scotland on the big stage.

He told the Scotsman: “I was delighted to see Naisy get his 50th cap against Cyprus in November and to lead the team out on the day. It was well deserved. He’s been a fantastic servant for the country and a really good player. Striker has been a problem position for Scotland, but a fully-fit Naisy brings a bit of everything.

“There is a cleverness to his play. He’s got the experience that Scotland need in and around the squad.

“He has a good effect on the players around him, for club and country. He brings the whole package. So, for me, Naisy at his best brings a lot to the table.”

Scotland are currently on a three-match winning streak under Clarke after nearly seeing their qualifying hopes fade away. Four defeats in a row have since been followed up by wins over San Marino, Cyprus and Kazakhstan.