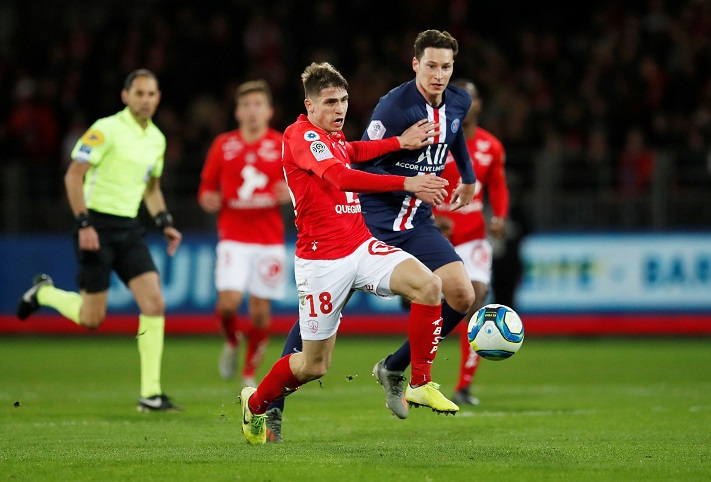 Brest defender Romain Perraud has revealed Celtic were interested in signing him this summer but former club Nice blocked a deal.

The left-back was wanted by the Hoops to replace Arsenal-bound Kieran Tierney, who left Celtic Park in a £25million deal.

Perraud has been an impressive figure in his fledgling career so far despite not breaking into the first team at Nice.

He made one appearance for Patrick Vieira’s side in Ligue 1 in the 2017-18 season and was sent out on loan to Paris FC last year.

He played 33 times for the Ligue 2 side as they finished fourth and qualified for the play-offs. However, they ultimately failed to win promotion and could not bring Perraud back for a second season.

The 22-year-old, who has represented France at every level from Under-17 to Under-20, has since joined Ligue 1 outfit Brest in a permanent deal.

However, he has admitted Celtic were in the hunt for him over the summer but Nice would not let him join the Scottish champions.

“With Celtic, the discussions started at the beginning of the transfer window but Nice did not want to hear anything, so they did not come back,” he said.

“There remained Dijon and Brest. In the end, I chose Brest. I was seduced by the project and the speech I received.”

Perraud has made 11 appearances for his new club and the promoted club currently sit 12th in the table.

Celtic eventually solved their issues at left-back with the signings of Boli Bolingoli from Rapid Vienna and Greg Taylor from Kilmarnock.