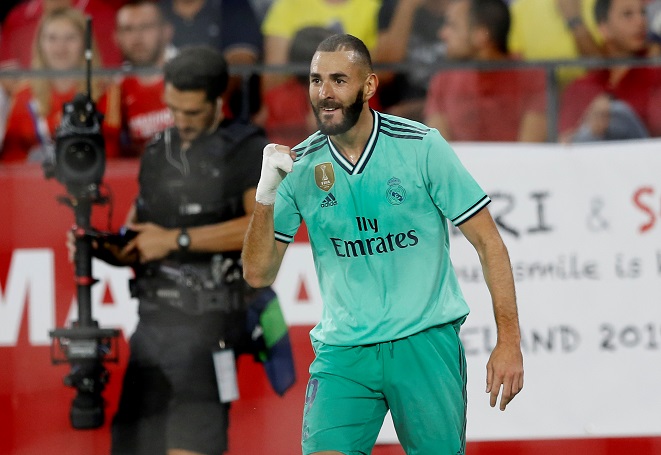 Lyon sporting director Juninho says he will do all he can to convince Karim Benzema to see out his career at the Ligue 1 club.

The 31-year-old striker has been a revelation with Real Madrid over the last 10 years, scoring 233 goals and helping them win two La Liga titles and four Champions Leagues.

However it all began at Lyon where he made his way through the academy and starred in Ligue 1 before making a £35million switch to Real in 2009.

The Frenchman is still going strong at the Bernabeu, and remains Real’s leading striker, but that is not stopping Juninho dreaming of a reunion with his former team-mate at Lyon.

Since Cristiano left in 2018, only three players in Europe have scored more than Benzema: Robert Lewandowski (63 goals), Lionel Messi (60) and Kylian Mbappe (47). [as] pic.twitter.com/dwVoWchMad

“My desire is to propose to Karim that he finishes his career at Lyon,” the Brazilian told  OLTV. “He is from here, he feels from here. Why not make an economic effort between both parties to make it happen?

“We can’t offer the same salary as Real Madrid, but we will wait for the right moment. We exchanged messages when I was in Brazil. I felt like he would like to come. He has a lot of respect for the club.

“I want him to come and play with us for two years, and then train some of the younger players. Karim could be the leader that we need. I dream that he will end his career here at Lyon, his home.”

Benzema has scored 11 goals in 15 appearances for Real so far this season and could have at least another couple of seasons in him before he decides to move on.