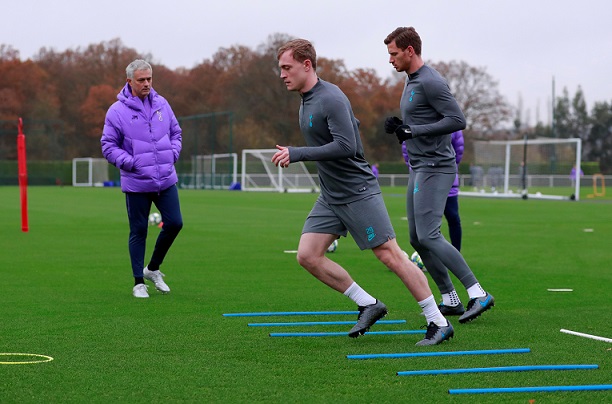 Tottenham boss Jose Mourinho is expected to field a youthful starting XI when his side take on Bayern Munich on Wednesday evening.

Mourinho won his first Champions League game in charge, beating Olympiacos 4-2 to book his team’s place in the last 16.

With Bayern already guaranteed top spot in Group B, there appears little worth in fielding all of Spurs’ first team and with the Portuguese having seen it all before, he will be keen to protect his main players.

Regulars Harry Kane, Dele Alli, Jan Vertonghen and Serge Aurier have all been left at home in London. Hugo Lloris, Ben Davies, Erik Lamela, Harry Winks, Michel Vorm and Tanguy Ndombele are all injured, with both Ndombele and Winks the closest to fitness but unlikely to be risked.

Bayern beat Spurs 7-2 back in October in the reverse fixture, but have had their own upheaval this season, with coach Niko Kovac sacked and Hans-Dieter Flick taking over on a temporary basis.

Both Corentin Tolisso and Jerome Boateng are expected to be fit after thigh and toe injuries.

Those injuries were picked up in Saturday’s 2-1 defeat Borussia Monchengladbach. After also losing by the same score to Bayer Leverkusen late last month, the Bavarians sit seventh in the Bundesliga, seven points off the leaders, Gladbach.

Lucas Hernandez, Jann-Fiete Arp and Niklas Sule are all sidelined, while midfielder Michael Cuisance is another expected to miss Wednesday’s match due to an unspecified injury suffered in training.

October’s match between the pair was the first time the pair had met competitively, although they had previously faced off in the Audi Cup in pre-season.

With both off the pace domestically, the pair may see this as a game to give youth a chance with tough fixtures on the horizon at the weekend.

Spurs are away at Wolverhampton Wanderers on Sunday, while Bayern host Werder Bremen the day before.