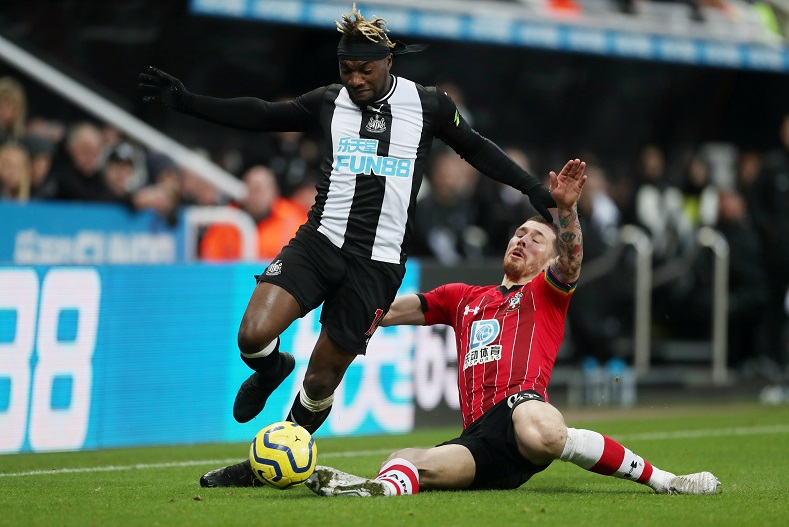 Newcastle United will be able to recall Allan Saint-Maximin for the visit of in-form Chelsea on Saturday.

Frank Lampard’s Blues travel to Tyneside on the back of a crushing 3-0 win over Burnley but Steve Bruce’s side have been handed a welcome boost with the news of winger Saint-Maximin’s return to the fray.

The ex-Monaco wideman has featured 12 times in the Premier League this season although a hamstring injury has kept him out for over a month.

The availability of £40million summer acquisition Joelinton provides a further lift. The striker broke a 20-game duck on Tuesday when he netted in the 4-1 FA Cup third-round replay drubbing of Rochdale and Magpies fans will be hoping the Brazilian can now find some much-needed momentum.

With Andy Carroll still struggling with a hip problem and Dwight Gayle ruled out with a thigh injury, the Magpies are counting on the former Hoffenheim man to lead them through Saturday’s encounter.

Right-backs Javi Manquillo and DeAndre Yedlin are sidelined along with midfielders Ki Sung-yong and Yoshinori Muto.

Chelsea have no fresh injury worries ahead of the clash although midfield dynamo N’Golo Kante is being closely monitored due to a hamstring problem.

USA international Christian Pulisic remains out of contention, having been absent since the draw with Brighton on New Year’s Day, but Marcos Alonso could feature against the Magpies, whose outside chances of a foray into Europe are still very much alive.

Bruce’s men are 13th but just six points off Sheffield United in sixth place. However, with the drop zone just five points behind, Newcastle fans will still be looking over their shoulders.

Next up after the visit of Chelsea is a trip to Merseyside on Tuesday evening that will pit the Magpies against an Everton side also in Premier League limbo – neither out of the running for the Europa League nor certain of survival.

Fourth-placed Chelsea are also in action on Tuesday when they face Arsenal before an encounter with Leicester City on February 1.