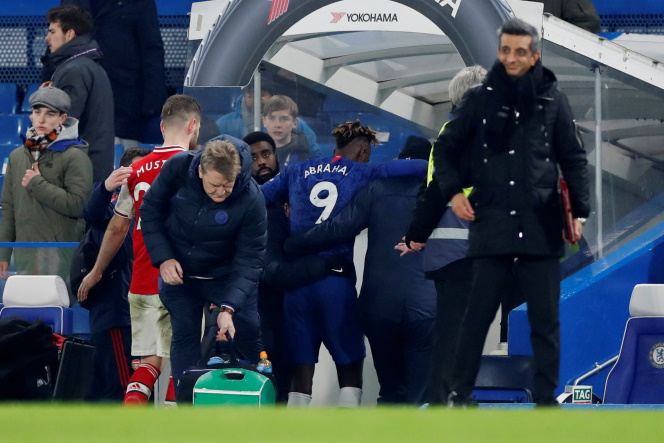 England striker Tammy Abraham will be given a late fitness test as Chelsea prepare to host Manchester United in the Premier League on Monday.

The Three Lions forward has been struggling with an ankle problem and will be given as much time as possible to prove his fitness ahead of the encounter with the Red Devils at Stamford Bridge.

Manager Frank Lampard also has injury concerns regarding Christian Pulisic and Ruben Loftus-Cheek and neither are set to feature against Ole Gunnar Solskjaer’s side.

As for the visitors, midfielder Nemanja Matic is available after suspension.

However, Marcus Rashford, Paul Pogba and Scott McTominay are all still sidelined with injuries but are on the road to recovery.

January loan signing Odion Ighalo has been named in the squad and could feature off the bench against the Blues.

Fourth-placed Chelsea, who are now just a point above fifth-placed Tottenham, can open up a nine-point Premier League lead on ninth-placed United with victory at Stamford Bridge.

But not even that sizeable advantage would be enough for Blues boss Lampard to believe United would be out of the top-four running.

When asked if United’s top-four hopes would be over with defeat on Monday, Lampard said: “No, not on nine points. Not at this time with the amount of points to play for and the way the Premier League is, certainly not.”

United have already secured two victories over Lampard’s men this season, having earned a 4-0 win in their opening Premier League game of the season at Old Trafford, before a 2-1 success at Stamford Bridge in the Carabao Cup.

Victory for United, who played out a goalless draw with Wolves in their last Premier League outing, would see them climb up into seventh place in the table and move just a point behind sixth-place Sheffield United.