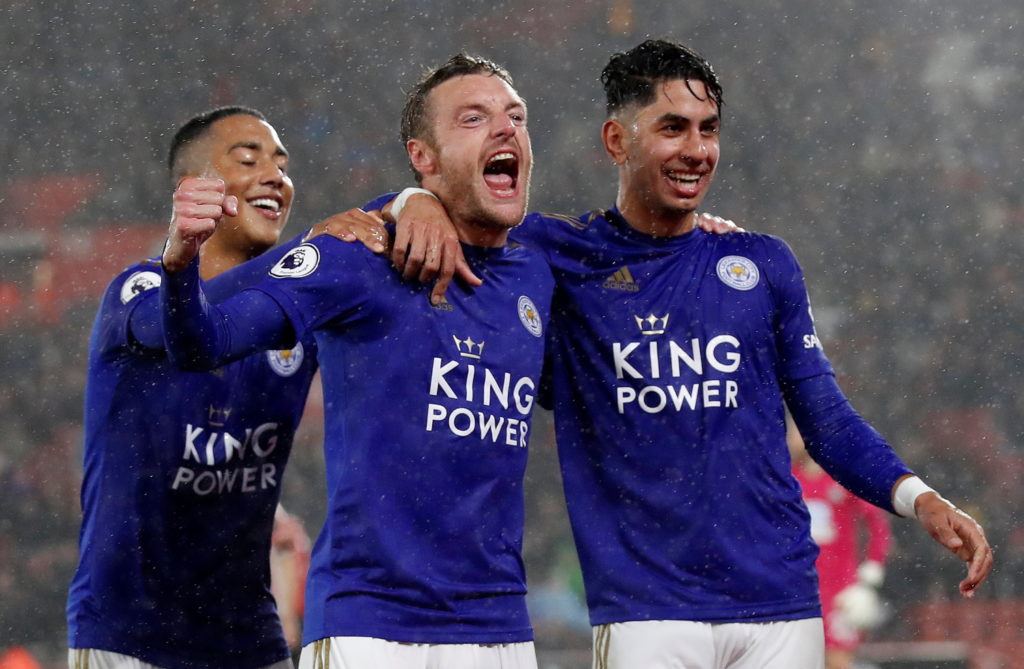 Ayoze Perez and Jamie Vardy both scored hat-tricks as Leicester thrashed ten-man Southampton 9-0 at St Mary’s to jump up to second place in the Premier League.

Saints’ boss Ralph Hasenhuttl stuck with the starting XI which secured a 1-1 draw at Wolves last weekend as his side targeted first home win since April.

Leicester chief Brendan Rodgers also named an unchanged side from the 2-1 win against Burnley at the King Power Stadium last Saturday.

The Foxes knew a win would take them up to second and they made the ideal start in wet and windy conditions on the South Coast.

Ben Chilwell started the 10th minute move which led to the opener as he found Harvey Barnes in the area. His effort was parried by Angus Gunn, but Chilwell followed up to tuck away the rebound from the left side of the box.

To add insult to injury for the Saints a check with the Video Assistant Referee (VAR) picked up a bad foul by Ryan Bertrand on Perez in the build-up to the goal and referee Andre Marriner subsequently brandished a red card to the full-back.

Leicester set about dominating the ten men and it was no surprise when they doubled the lead on 17 minutes when Chilwell released Barnes down the left and he evaded two challenges before teeing up Youri Tielemans who finished past Gunn.

It was 3-0 just two minutes later as Ricardo Pereira played in Perez and he exchanged passes with Tielemans before slamming his first goal for the club inside Gunn’s near post.

It was almost four on 35 minutes when Chilwell and Barnes again combined down the left with the latter seeing his shot saved by Gunn who had to react quickly to prevent the ball rolling over the goalline.

Leicester did make it 4-0 on 39 minutes with Chilwell again involved as he floated a superb ball towards the back post and Ayoze produced an emphatic finish from a tight angle.

Jamie Vardy got in on the act just before half-time when he collected a Chilwell pass and turned past Maya Yoshida before lifting his shot over Gunn.

It was more of the same after the break as Vardy nicked the ball off Yoshida and advanced into the area only to be denied by the outstretched foot of Gunn.

Perez then completed his hat-trick on 57 minutes when he collected Barnes’ ball over the top and took a touch before finishing with aplomb.

The humiliation continued a minute later when Chilwell got to the left byline and put a cross into the middle where an unmarked Vardy was waiting to pick his spot past Gunn with a header from six yards.

The Saints fans who stuck it out were finally given a moment of excitement on 69 minutes when Nathan Redmond cut inside Jonny Evans after a surging run and lashed a right-foot strike from the edge of the area which Kasper Schmeichel impressively tipped over.

Normal service almost resumed on 74 minutes when Perez hit a shot from a tight angle down the right and the ball rolled agonisingly wide of the far corner with Evans inches away from converting.

James Maddison made it 8-0 five minutes from time when he curled a free-kick over the wall and into Gunn’s top corner with five minutes remaining.

Vardy capped a special night for the Foxes and completed a nightmare Friday night for the Saints as he scored his hat-trick goal from the penalty spot in stoppage time having been fouled in the area by Jan Bednarek.

The biggest Premier League away win puts Leicester a point ahead of Manchester City and five off leaders Liverpool, while Southampton’s worst-ever defeat on home soil sees them slip into the relegation zone behind Newcastle on goal difference.