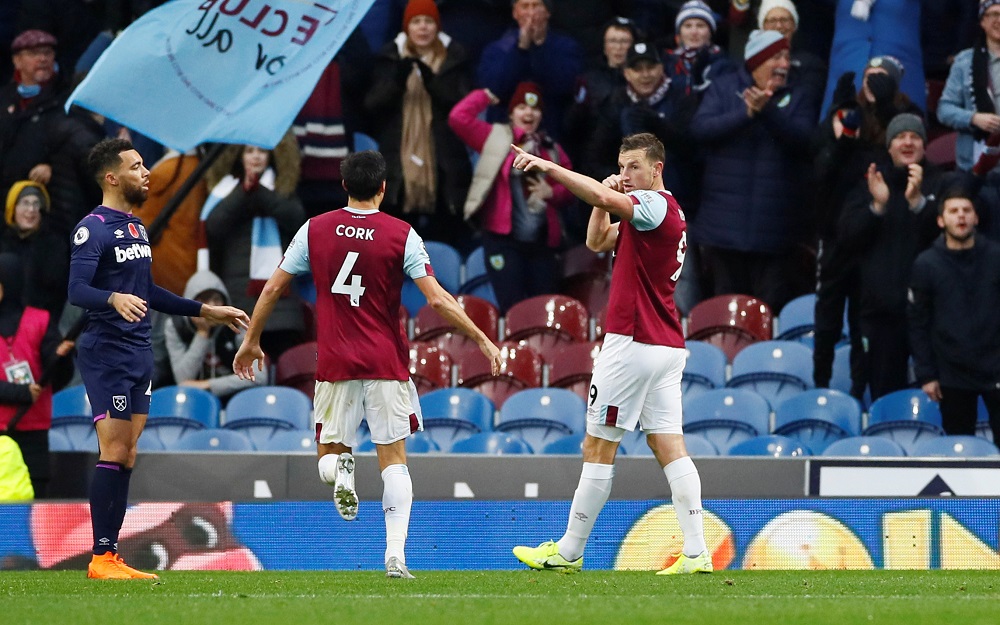 Burnley proved to be far too strong for an out-of-form West Ham side as they cruised to a 3-0 victory at Turf Moor.

The Clarets made three changes as Chris Wood returned from injury to replace Jay Rodriguez in attack, while Phil Bardsley and Charlie Taylor were preferred to Matt Lowton and Erik Pieters in the full-back positions.

The visitors showed two alterations to the XI who began the 3-2 home defeat to Newcastle United last time out, with Ryan Fredericks and Pablo Fornals replacing Pablo Zabaleta and Andriy Yarmolenko.

The game got off to an open start and it was the hosts who made the breakthrough with 11 minutes played.

Dwight McNeil curled over a corner from the right to the back post, James Tarkowski headed back across the face of goal and Ashley Barnes was on hand to turn the ball home from close range for his first goal in eight games.

The Hammers then suffered an injury blow with Mark Noble forced off, to be replaced by Yarmolenko, with the visitors struggling to make much of an impact as an attacking force.

And the Irons appeared to have fallen two goals behind nine minutes before half-time when Wood powered a header into the top corner of the net, only for VAR to rule the effort out for offside.

It was 2-0 to the hosts right on the stroke of half-time as Fabian Balbuena coughed up possession, McNeil crossed from the left and Wood marked his return by rattling a left-foot finish into the back of the net.

The visitors began the second period strongly as they tried to find a way back into the game, with Yarmolenko forcing a rare save from Nick Pope.

However, it was 3-0 nine minutes into the second half as Hammers keeper Roberto Jimenez made a complete hash of an Ashley Westwood corner, punching the ball into his own net.

Aaron Cresswell drew a fine block from Pope, while at the other end Roberto atoned somewhat for his earlier error by pushing away a Bardsley drive.

Yarmolenko shot narrowly wide late on the Irons continued to try and find a consolation but they suffered an injury setback as stoppage time ticked around, with Manuel Lanzini stretchered from the field.