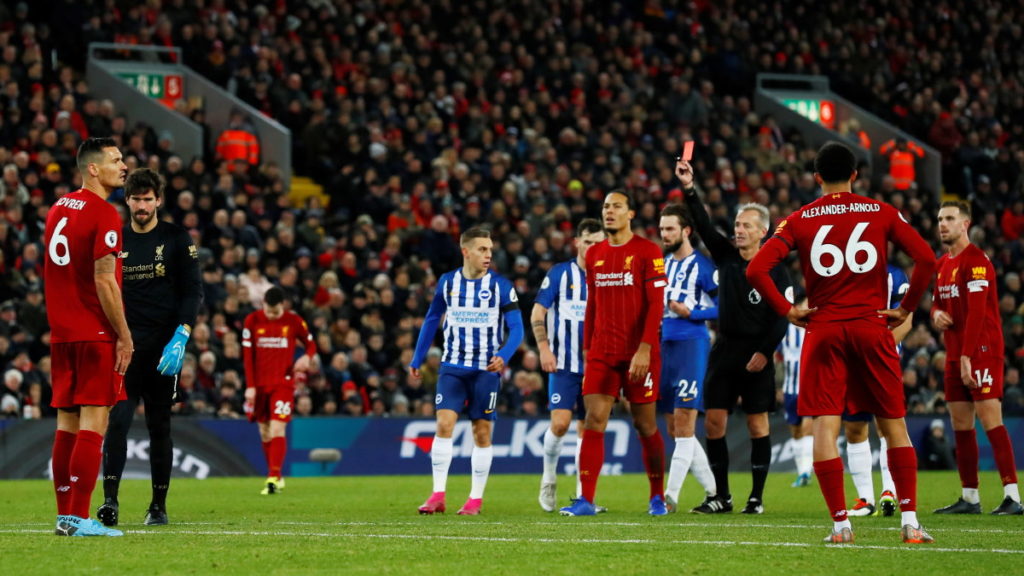 Liverpool were reduced to 10 men after seeing keeper Alisson sent off in the second half but still managed to grind out a 2-1 win over Brighton at Anfield.

It looked as if the Premier League pacesetters were coasting to a comfortable, if not particularly inspiring, win as they led 2-0 with 76 minutes on the clock until the Brazilian was handed his marching orders for an obvious handball outside his penalty area.

Lewis Dunk pulled a goal back three minutes later and Albion pushed for an equaliser but were left frustrated as the Reds clung on.

The duo combined again for the hosts’ second just six minutes later from another set-piece. Alexander-Arnold whipped in a corner and an inexplicably unmarked Van Dijk picked out his spot to head beyond a helpless Mathew Ryan in the Brighton goal.

Brighton tried to find a way back into the game but crosses from Davy Propper, Pascal Gross and Aaron Mooy were easily dealt with by the Liverpool defence.

Jurgen Klopp’s league leaders controlled the game well without really coming close to a third and it appeared as if they were heading for a routine three points until Alisson’s moment of madness.

Seagulls substitute Leandro Trossard managed to break free and Alisson handled outside his area as he rushed out to close the winger down.

That gifted the visitors a lifeline and Dunk made the most of it as his clever free-kick bamboozled the Liverpool rearguard.

Substitute keeper Adrian was still organising his wall and was left stranded by Dunk’s effort, ensuring his first touch was picking the ball out of his net.

Brighton nearly nicked a point but Adrian denied Aaron Mooy late on as Liverpool made it 13 wins from 14 Premier League games this term.

After defending champions Manchester City were held at Newcastle earlier on Saturday, Liverpool now have an 11-point lead at the top of the Premier League table although Leicester can cut that advantage down to eight if they beat Everton on Sunday.

Brighton sit in 15th place and are five points clear of danger although all six sides below them are yet to play this weekend.