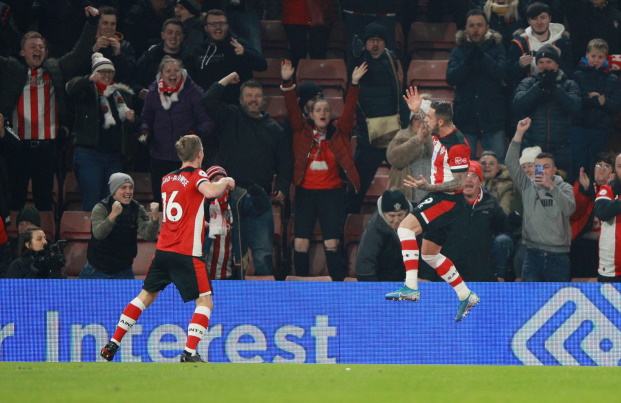 First-half goals from Danny Ings and Ryan Bertrand helped Southampton win their second game in a row at the expense of Norwich City.

The Saints went into the game in high spirits after their win over Watford, and they are now four points clear of Norwich, who remain in the bottom three.

Both sides made a positive start on the south coast, but it was the home side that opened the scoring. Norwich ace Todd Cantwell gave away a cheap free-kick on the edge of his own box, and Southampton made him pay just seconds later.

James Ward-Prowse’s free-kick was met by Ings at the near post, and the former Liverpool ace beat Ben Godfrey in the air to make it 1-0.

As Norwich struggled to come back into the game, Daniel Farke switched to a 5-4-1 formation, but it did not help them stop the constant waves of Southampton attacks.

With three minutes remaining in the first half, Ings won a corner after his strike hit Godfrey on the edge of the box. Ralph Hasenhuttl’s side then doubled their advantage from the resulting corner as Ward-Prowe’s delivery caused chaos.

Shane Long flicked the ball on at the near post, and his pass fell to Bertrand who fired home from close range. Norwich had Tim Krul to thank at the interval for keeping the score at 2-0 as the Dutchman made a flying save to deny Pierre-Emile Hojbjerg with the final kick of the first half.

Farke made a double change at the start of the second half as he threw on Alexander Tettey and Marco Stiepermann in a bid to bolster his team’s chances in the middle of the park.

That decision gave his team an immediate lift, Teemu Pukki and Sam Byram both seeing efforts saved by Alex McCarthy.

The England international could do nothing to stop Norwich from grabbing a consolation goal though as Pukki found the back of the net in the 66th minute. The Finland international raced onto a pass from Tettey before finding a gap at the near post.

Hasenhuttl made defensive changes towards the end of the tie, but his tactics were nearly punished as Byram tried his luck with seconds to go.

The former Leeds United fullback saw his first shot blocked before his second sailed over the bar as Southampton held on to move out of the bottom three.