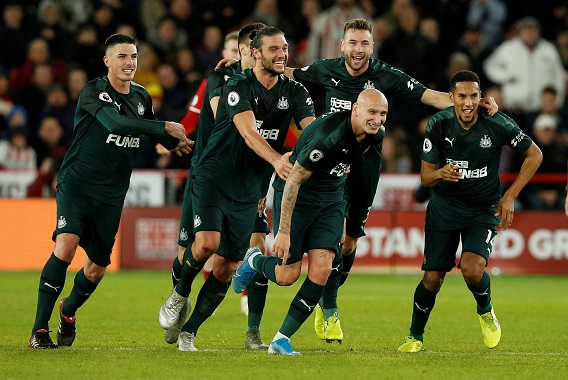 Newcastle United secured a hard-fought 2-0 victory at Sheffield United on Thursday evening in a game that witnessed another controversial VAR moment.

Both managers eluded to making changes prior to the match at Bramall Lane due to the busy festive period and it was in attack where alterations were made, with Billy Sharp and Oliver McBurnie coming in for the Blades while Andy Carroll replaced club-record signing Joelinton in Newcastle’s attack.

Chris Wilder’s men were on the front foot from the start and they were denied twice by goalkeeper Martin Dubravka, who tipped over Enda Stevens’ shot after it had deflected off Javier Manquillo’s right foot before McBurnie’s bundled effort from a corner was well stopped.

Newcastle had barely threatened but they took the lead in the 15th minute when Allan Saint-Maximin, who was struggling with a left ankle issue throughout the contest, rose highest in the penalty area to power a header into the bottom-right corner and open his account for the Magpies.

Scotland international McBurnie then had a header superbly saved by Dubravka, who stuck out a left hand to deny the striker from eight yards, before Oliver Norwood’s powerful freekick on the edge of the box was beaten away by the keeper.

The pattern of the game didn’t change after the break and Newcastle were once again indebted to their Slovakian shot-stopper, who tipped another McBurnie header away despite being clattered in a challenge just moments earlier.

However, the big talking point of the game came on the 70th minute when Andy Carroll flicked a ball on for Jonjo Shevley, who ran through on goal to slot past keeper Dean Henderson, who had all-but stopped due to the linesman’s flag going up.

In truth, the two closest defenders for the Blades had stopped playing after seeing the flag go up but, after checking with VAR, Carroll was onside when heading the ball and Shelvey’s goal was awarded, handing the visitors a 2-0 lead.

It was a huge moment in the match and one that the hosts couldn’t recover from as they didn’t test man-of-the-match Dubravka in the last 20-plus minutes.

For Newcastle, they return to Tyneside with all three points and a clean sheet, seeing them climb to 11th in the table, level on points with the Blades who remain ninth.