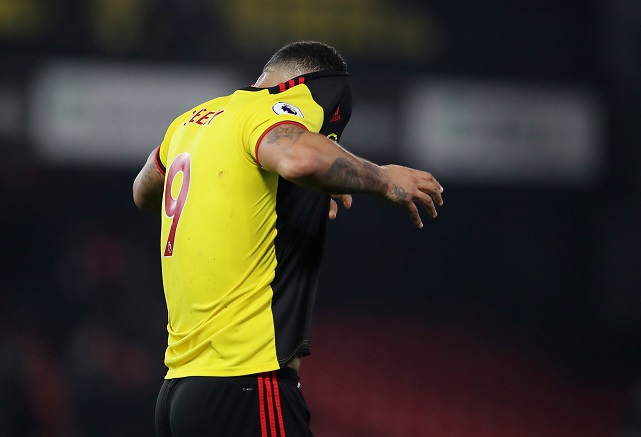 Watford set a club record of 12 homes games without a win as watching boss Nigel Pearson saw his new side scrap for a point against Crystal Palace.

The Hornets felt they might have a chance to steal the win late on when skipper Troy Deeney tangled with Gary Cahill inside the box although referee Martin Atkinson waved away penalty appeals.

Palace earned a third successive clean sheet but Roy Hodgson’s men failed to register a single shot on target at Vicarage Road in a game that failed to ignite on a cold December afternoon.

The early exchanges belied the tame contest that would unfold. Etienne Capoue and Ismaila Sarr threatened for the home side, while James MacArthur volleyed wide of Ben Foster’s goal at the other end.

Those openings all came inside 15 minutes but the first half went by without any major incident.

Palace had to wait until ten minutes from the end for their clearest chance. Andre Ayew skipped away from a challenge on the edge of the box and curled a shot goalwards but it lacked accuracy.

As the clock ticked down, Cahill had to stretch into a challenge to halt Sarr’s progress on goal before Watford thought they had a chance to grab all three points.

Inside four minutes added on time and, perhaps through desperation, the game came to life.

Deeney and Cahill clashed inside the box, with the Watford captain adamant he was being man-handled. Atkinson was unmoved and the VAR check yielded no gain for Watford.

Capoue then scythed down Wilfried Zaha in full flight, much to the dismay of the Palace winger, and while Sarr had time for one more shot at goal, he was foiled by Vicente Guaita and the game ended in stalemate – an outcome neither side could argue with.