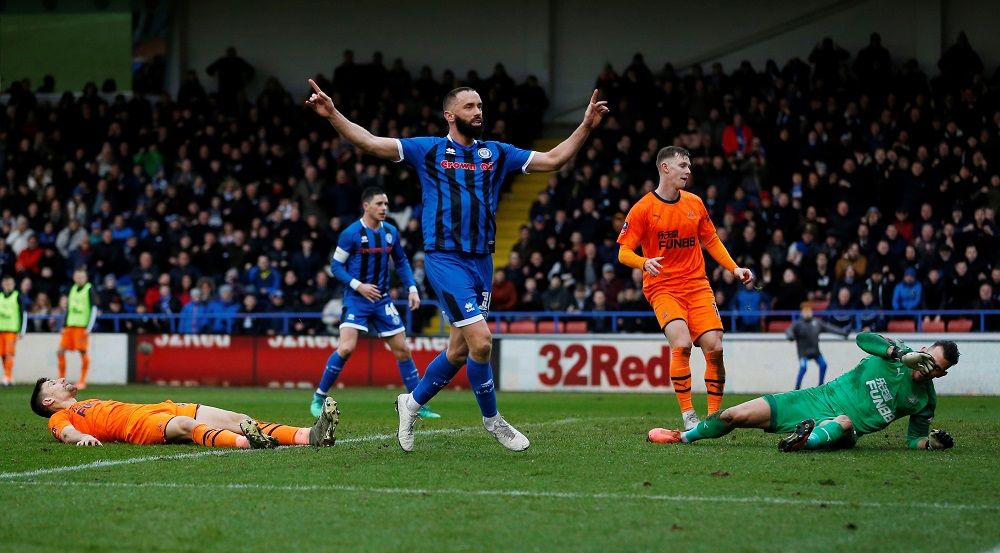 Veteran striker Aaron Wilbraham rammed home an equaliser as Rochdale held Newcastle United to a 1-1 draw in their FA Cup third round clash at Spotland.

Dale made one alteration to the XI who began the 2-1 victory at Accrington Stanley, with MJ Williams replacing veteran Irish defender Paul McShane.

The Magpies made five changes to the team beaten 3-0 at home by Leicester City last time out, with DeAndre Yedlin, Emil Krafth, Christian Atsu, Matt Longstaff and Sean Longstaff all handed starts.

The visitors saw plenty of possession in the opening stages and were content to knock the ball around to take the sting out of the game.

Matty Longstaff saw an effort deflected behind for a corner and with 17 minutes played the Magpies broke the deadlock through Miguel Almiron.

Atsu beat a defender on the left side of the area and cut the ball back to Almiron, who lashed a left-foot shot into the roof of the net, with home keeper Robert Sanchez left rooted to the spot.

Joelinton then headed over from an Isaac Hayden on the half-hour mark as the Premier League side continued to hold the upper hand and the Brazilian was then denied by Sanchez as his scuffed shot headed for the bottom corner of the net.

Dale brought on Wilbraham at the interval to try and shake things up, but still the Premier League outfit continued to dominate, with their League One hosts finding it difficult to make any progress in the final third.

However, the Magpies had a lucky escape just before the hour mark as Martin Dubravka spilled a shot from Oliver Rathbone and Ian Henderson slammed the rebound against the outside of the post.

Dubravka had to be alert to deny the impressive Rathbone again soon after, but he could do nothing 11 minutes from time as a Luke Matheson cross fell to Wilbraham and he swept the ball home from six yards out.