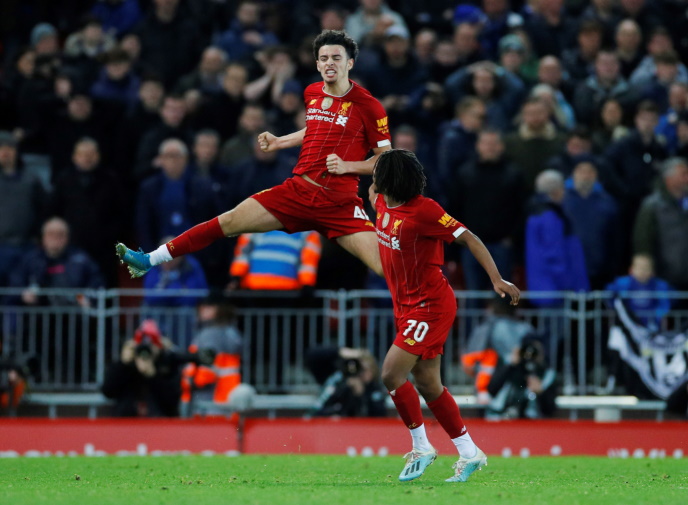 A stunning strike from Liverpool youngster Curtis Jones booked his side's place in the fourth round of the FA Cup at the expense of rivals Everton.

The Reds ace made history on a night where he scored his first goal for the club to punish Everton for their sloppy finishing.

Liverpool coach Jurgen Klopp made nine changes from the team that beat Sheffield United 2-0 on Thursday, most notably Takumi Minamino making his debut after his move from Salzburg.

Everton boss Carlo Ancelotti did all he could to win the tie making just two alterations, and the Toffees made a flying start at Anfield.

Striker Dominic Calvert-Lewin tested Adrian inside the first six minutes, but the former West Ham United keeper denied him with his legs and Liverpool’s afternoon took a turn for the worst just two minutes later as James Milner limped off with a leg injury.

The Toffees continued to pile forward but Adrian denied Mason Holgate after a free-kick in the 12th minute. Gylfi Sigurdsson’s cross was met by the centre-back but he headed the ball straight at the Spaniard.

Adrian then thwarted Richarlison just before the half-hour mark as the Brazilian tried to score from the edge of the box and it took until the 41st minute for Jordan Pickford to make a save and it was the best of the match as he denied Divock Origi.

The Belgium international turned into space on the edge of the area, but Pickford pushed his effort past the post as the teams went in level at half-time.

Neither side could make a breakthrough in the first 70 minutes, but Jones sent Liverpool fans wild just a minute later.

The 18-year-old worked a one-two on the edge of the box with Origi before curling a shot in off the underside of the crossbar, giving Pickford no chance in goal.

Everton tried in vain to grab an equaliser and in the end, they were punished for their poor finishing as Liverpool extended their impressive record against them.

The Reds are unbeaten in their last 23 home games against Everton in all competitions, while they beat them twice at Anfield in the same season for the first time since the 1986-87 campaign.

Liverpool will find out their opponents for the fourth round when the draw takes place on Monday before Arsenal’s clash with Leeds at the Emirates Stadium.