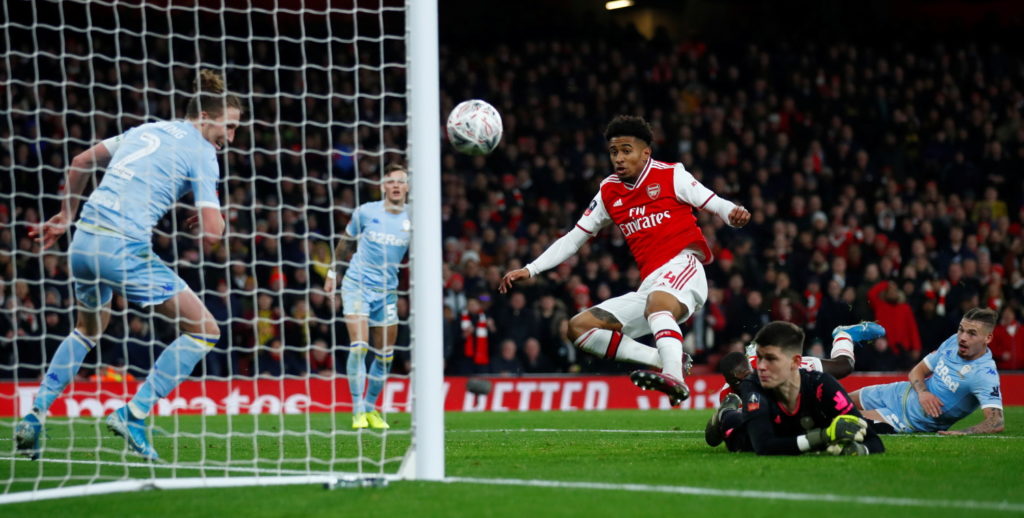 Arsenal edged past Championship leaders Leeds United 1-0 at the Emirates Stadium to book an FA Cup fourth round trip to Bournemouth.

Leeds boss Marcelo Bielsa also made four changes from the 1-1 draw at West Brom as he handed 19-year-old goalkeeper Illan Meslier and midfielder Robbie Gotts their debuts, while left back Barry Douglas and defender Gaetano Berardi also came into the side.

Leeds started brightly, but it was the hosts who had the first notable shot on target when Nicolas Pepe fired an effort into the hands of Meslier on eight minutes.

The visitors then stepped up another gear and had several chances with Patrick Bamford heading just wide, before Jack Harrison saw an effort beaten away by Martinez on 15 minutes.

A minute later Bamford went even closer as he picked up a return pass from Luke Ayling and then rattled the top of the crossbar with a superb strike, although he will feel that he should have hit the target.

Leeds continued to look the more likely to score the opening goal to the point some of the Gunners’ players were arguing amongst themselves.

Arsenal did manage another effort just after the half-hour when David Luiz got up to meet a Mesut Ozil corner but sent his header just wide of the upright.

On 33 minutes Ezgjan Alioski looked certain to score when he rose above the Arsenal defence to meet Ayling’s cross, but he failed to get a clean header on the ball and it handed Martinez the opportunity to make the save.

Leeds’ failure to take their first half chances returned to haunt them when Arsenal came out for the second half looking like Arteta had some stern words during the interval.

Alexandre Lacazette curled a free-kick over the defensive wall and off the corner of the crossbar and post on 50 minutes, before Guendouzi was denied by Meslier moments later.

The Gunners took the lead on 55 minutes when Nelson pounced to lift the ball over Meslier in the area after Lacazette’s low cross in from the right dropped to him off the legs of Berardi.

Lacazette then appeared to be pulled back by Berardi inside the area, but a check with the Video Assistant Referee (VAR) came back fruitless as the hosts appealed for a 65th minute penalty.

Leeds pressed late on in a bid to secure an equaliser and a replay at Elland Road next week.

However, the Gunners comfortably held on and will look forward to a fourth round tie against Eddie Howe’s Cherries at the Vitality Stadium on the weekend of Saturday January 25, while Leeds can now focus on their Championship promotion push.