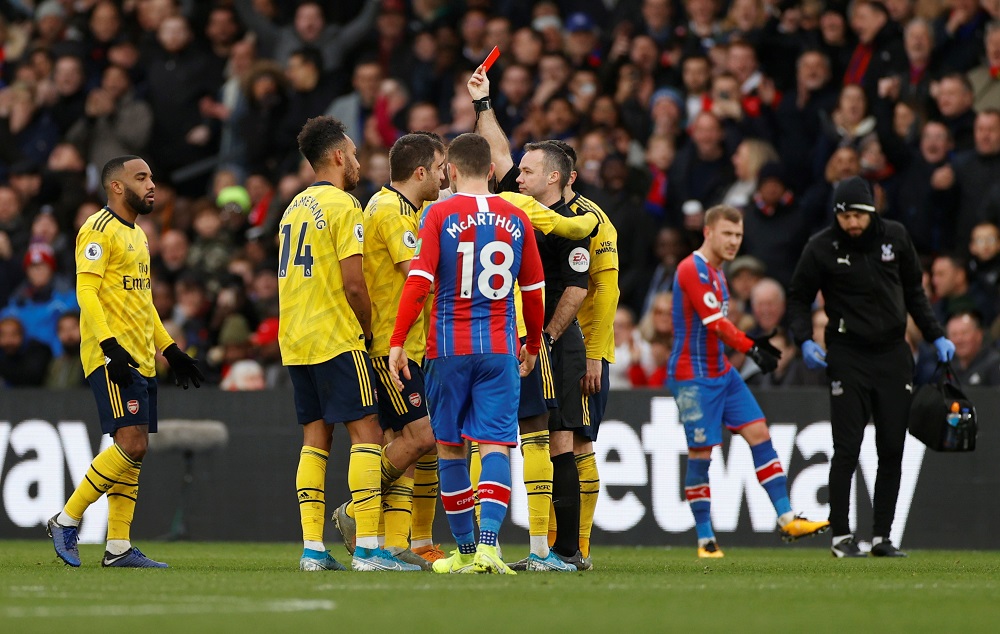 Arsenal survived having Pierre-Emerick Aubameyang sent off in the second half as they dug deep to take a point from their trip to Crystal Palace.

The Gunners had controlled the opening period and grabbed the opener after 12 minutes, Aubameyang firing in his 16th goal of the season after a neat move.

Manager Roy Hodgson clearly got into his Palace side at half-time after a lacklustre first 45 minutes and the Eagles were better after the break, grabbing an equaliser in the 54th minute when Jordan Ayew’s shot was deflected in.

Arsenal then had to play the final quarter of the game down to 10 men when Aubameyang was given his marching orders, as both teams had chances to win it late on before the spoils were shared at Selhurst Park.

It had all started so well for Mikel Arteta’s men when Arsenal were able to open up the hosts all too easily in the 12th minute, Alexandre Lacazette with a clever pass as slipped the ball through for Aubameyang, who took a touch before firing past Vicente Guaita.

Palace had found it tough to getting anything going offensively in the first half and it took until five minutes before half-time before they finally tested Bernd Leno, Cheikhou Kouyate stinging the palms of the Gunners stopper.

Arsenal were forced to replace Lucas Torreira at half-time, Matteo Guendouzi taking his place, and didn’t look as solid from that point on.

Palace got back on level terms nine minutes after the restart, Max Meyer being given too much time to put a cross in and the ball eventually came to Ayew, his shot deflecting off David Luiz and looping past Leno.

Luiz came close to nearly making amends for Palace’s equaliser after the Brazilian flashed a header just over the crossbar from a corner.

Arsenal’s day was then made a lot harder when goalscorer Aubameyang was sent off following a mistimed challenge on Max Meyer. The Gunners skipper was initially given a yellow card by referee Paul Tierney but, following a VAR review, the colour of the card was changed to red.

With the visitors’ backs against the wall, Sokratis was forced to clear the ball off the line after James Tomkins’ deflected header had got the better of Leno.

Ten-man Arsenal then came close to going back ahead, Nicolas Pepe’s angled drive hitting the post being tipped onto the post by Guiata before the Palace stopper got up to deny Lacazette on the follow up.