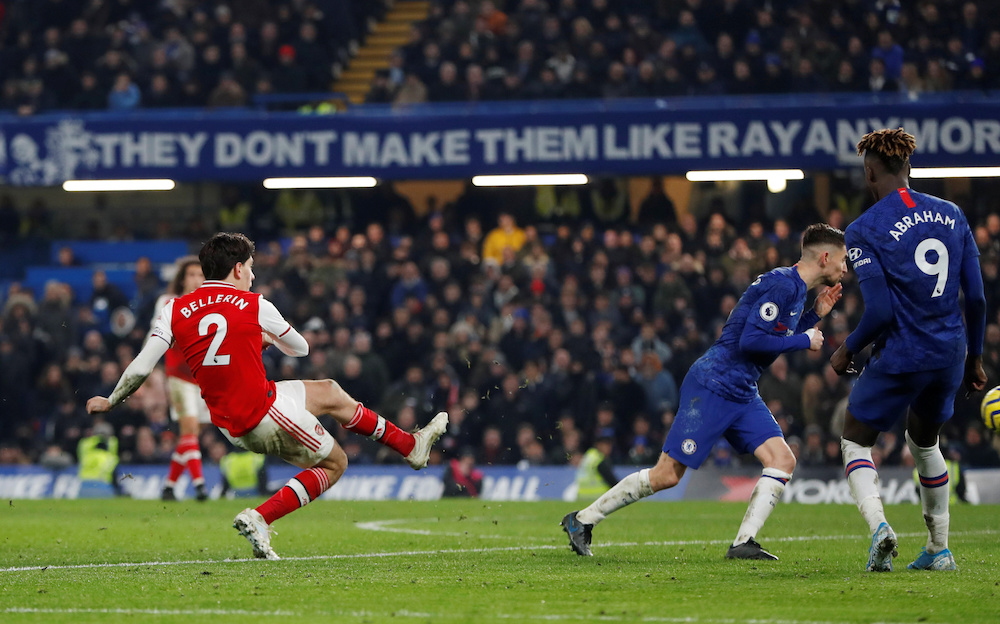 Arsenal overcame a first-half red card for David Luiz and falling behind twice to snatch a share of the spoils in a pulsating London derby with Chelsea.

It looked like being a miserable night for the Gunners when a defensive mistake lead to Luiz giving away a penalty and being sent off after 25 minutes, Jorginho stepping up to net the resulting spot kick.

However, Mikel Arteta’s men dug in and showed great spirit, equalising in the second half thanks to a fine run and finish from Gabriel Martnielli.

Chelsea were able to wrestle the advantage back in a thrilling second half and through they had won it when Cesar Azpilicueta made it 2-1 after 83 minutes.

The Gunners were not to be denied though, Hector Bellerin firing in the equaliser with three minutes remaining to frustrate Frank Lampard’s side.

Having played with 10-men for over an hour, Arsenal will be delighted to have avoided defeat, while for Chelsea it is more dropped points at home when they really should have strengthened their grip on fourth.

Chelsea made a bright start and were unfortunate not to get their noses ahead early on, Andreas Christensen and Tammy Abraham failing to convert with their headed efforts

Callum Hudson-Odoi nearly caught Bernd Leno out with a cross come shot which dinked off the top of the crossbar as the Blues piled the pressure on.

The breakthrough eventually came in the 25th minute when Luis hauled down Abraham in the box as he received his marching orders, much to the delight of the home fans. The Brazilian wasn’t helped out by his central defensive partner Shkodran Mustafi, the German’s short backpass putting Abraham through on goal and leaving Luiz with little choice.

Chelsea failed to make their man advantage count though and the Gunners eventually made them pay, Martinelli grabbing the equaliser in the 63rd minute.

From a Chelsea corner, the north Londoners broke quickly and a slip from N’Golo Kante allowed Martinelli to sprint the length of the field unchallenged before stroking the ball past Kepa Arrizabalaga for his 13th goal of the season.

In a back and forth second-half, Leno had to be on his toes to keep out substitute Ross Barkley’s header after he had ghosted into the penalty area.

Having cleared the initial cross, Arsenal were caught cold when the ball came in for a second time, Chelsea skipper Azpilicueta reacting quickest as he steered his shot home.

However, there was to be late drama with the 10 men of Arsenal equalising for a second time with three minutes to go play.

Hector Bellerin, on his return from injury, was allowed to cut in from the right before bending a curling effort beyond Kepa’s reach.

Michy Batshuayi could have responded almost immediately for Chelsea but couldn’t hit the target with his close range strike as the home side were forced to settle for a point.