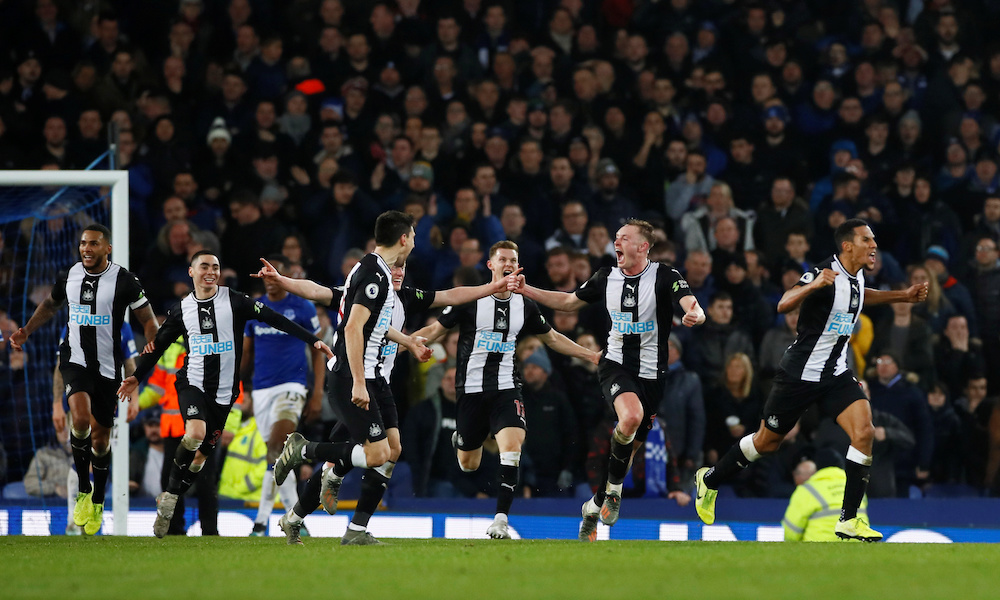 Newcastle produced a stunning comeback in stoppage time at Goodison Park to stun Everton and snatch a share of the spoils.

The night had started so well for Carlo Ancelotti’s side when Moise Kean grabbed his first goal for the club and the three points looked to be in the bag when Dominic Calvert-Lewin was on target nine minutes after half-time.

However, the Magpies produced the most unlikely of comebacks as Florian Lejeune scored twice with only minutes remaining to rescue the unlikeliest of points for the north-east strugglers.

Everton edged the scrappy opening exchanges and Martin Dubravka had to save Kean’s low shot before Yerry Mina narrowly failed to get on the end of Bernard’s teasing cross.

Ancelotti’s team deservedly took the lead in the 30th minute when Kean latched on to Bernard’s ball forward before sending his right-footed strike past Dubravka.

When Newcastle tried to respond, Joelinton headed a presentable chance over the bar but Everton deservedly led at half time.

The home team started the second half at a frenetic pace and, after Bernard had chipped the ball into the side-netting when he should have hit the target, they doubled their lead in the 54th minute when Calvert-Lewin slotted the ball into the far corner of the net after being played in by Lucas Digne.

Steve Bruce’s team created very little throughout the match and they could easily have fallen further behind as Dubravka had to keep out late efforts by Bernard and Mason Holgate.

However, Lejeune scored with an overhead kick as the match moved into stoppage time after a Jordan Pickford error to grab what appeared at the time as to be a late consolation goal.

There was to be a dramatic twist in the tale though when the Lejeune forced the ball home after a goalmouth scramble to rescue a point for the fortunate visitors.