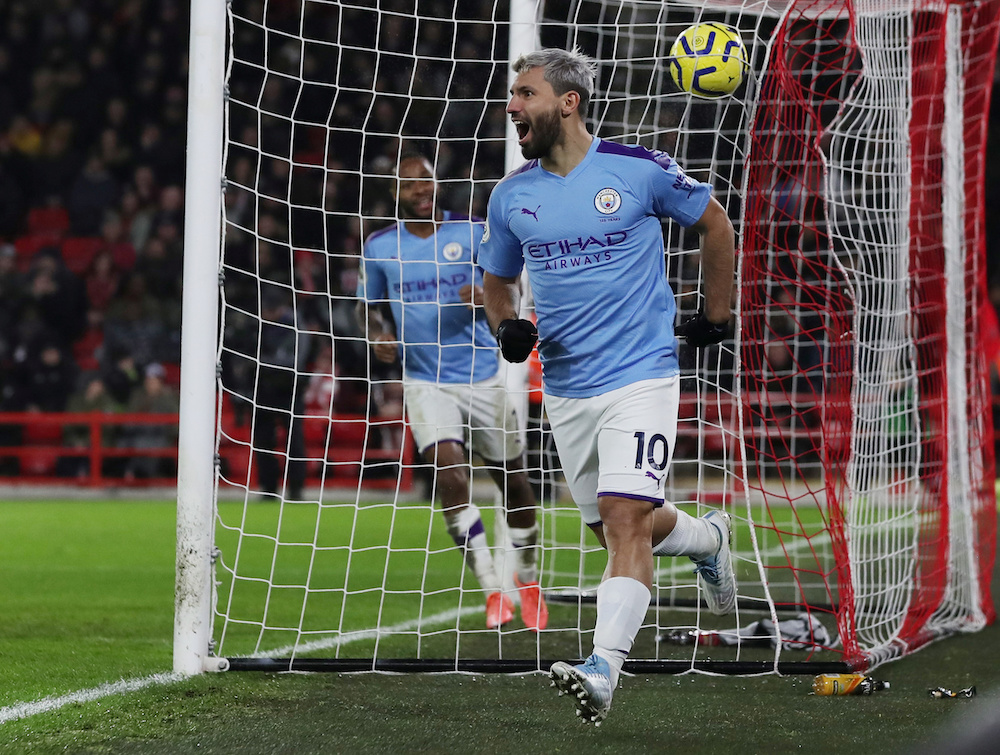 Sergio Aguero stepped off the bench to grab the winner for Manchester City as they edged out a resilient Sheffield United at a raucous Bramall Lane.

Blades boss Chris Wilder can be proud of another hard-working and determined display from his team, who more than held their own for long periods, only for the introduction of Aguero to make the difference.

The breakthrough should have come much earlier when City were awarded a first-half penalty, Gabriel Jesus fluffing his lines from 12 yards out as United stopper Dean Henderson came up with a big save.

Aguero’s strike 16 minutes from full-time proved to be the difference as the South American notched his sixth goal in his last three outings.

A much-changed City side took a while to get into their stride, Pep Guardiola opting to make seven alterations from the 2-2 draw with Crystal Palace, including handing a first start since August to Aymeric Laporte.

An energetic Sheffield United side matched the champions stride for stride but still had Henderson to thank for going in level at the break.

It took until the 20th minute before either goalkeeper was called into action, a mistake by Chris Basham presenting City with the first clear opening, only for Henderson to smartly stop Raheem Sterling from close range.

Henderson was called into action four minutes later when he denied Nicolas Otamendi what would have been a spectacular opener, the Blades goalkeeper parrying away the Argentine’s overhead kick.

City’s constant probing eventual brought about a penalty for City, Basham’s crude challenge upending Riyad Mahrez after a mazy run into the box. However, Henderson came up big again as he kept out Jesus’s effort from the spot, resulting in cries of “England’s Number One” from the Bramall Lane faithful.

City stepped it up after the break, enjoying 73 per cent possession, but still found chances hard to come by, Jesus heading straight at Henderson.

The Blades then nearly got their noses in front when substitute Lys Mousset’s backheel was smartly kept out by Ederson following a fine move from the home side.

With City searching for the opener they turned to Aguero and six minutes after his introduction, the Argentine made the breakthrough.

As so often is the case, Kevin de Bruyne was the architect as he registered his 15th assist of the season, the Belgian’s low cross presenting City’s all-time leading scorer with a simple finish to put the visitors ahead.

Sterling then nearly danced his way through a tired Sheffield United backline to grab City a second, only to miss the bottom corner with his strike.

The win keeps City in seventh, 14 points behind Liverpool, while Sheffield United stay in seventh.