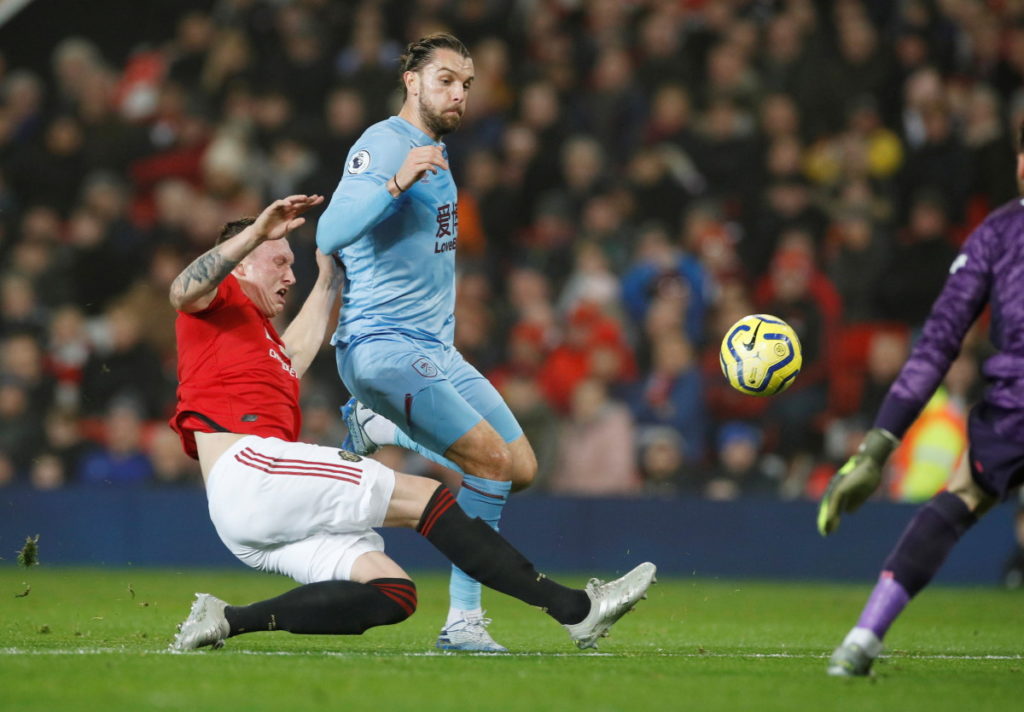 Manchester United’s top four hopes were dealt a blow as Burnley claimed a 2-0 win at Old Trafford on Wednesday.

Goals either side of half-time from Chris Wood and Jay Rodriguez secured the points for the Clarets as the visitors moved seven points clear of danger.

United looked the more likely of the two sides in the early stages and Aaron Wan-Bissaka in particular was a real threat.

The full-back managed to pick out Daniel James with a cross but his header was saved by visiting keeper Nick Pope. Wan-Bissaka also created a chance for Juan Mata but the Spaniard miscued his effort and failed to trouble the Burnley goal from just six yards out.

Anthony Martial was then denied by a superb sliding challenge from Charlie Taylor inside the Burnley penalty area and just three minutes later the visitors were ahead.

The Clarets won a free kick and sent it long towards Ben Mee, who nodded the ball down to Chris Wood and the striker swept home a left-footed half volley into the top corner on 39 minutes.

Burnley’s opener may have been a typical route-one effort, but there was a touch of real class about their second 10 minutes into the second half. Wood and Rodriguez combined for a one-two on the edge of the United penalty area and the latter smashed in a left-footed strike that gave David de Gea no chance as it went in off the underside of the bar.

United tried to mount a response and James hit an effort wide when well placed, while substitute Mason Greenwood also saw an effort just miss the target inside the final 10 minutes.

Burnley led 2-0 at Old Trafford last season and in the previous campaign but had to settle for 2-2 draws on both occasions. There was to be no repeat this time around though, as Sean Dyche’s men held on for a famous victory in Manchester.

The Clarets now sit 13th in the table, while United remain fifth and are six points adrift of Chelsea in fourth spot.