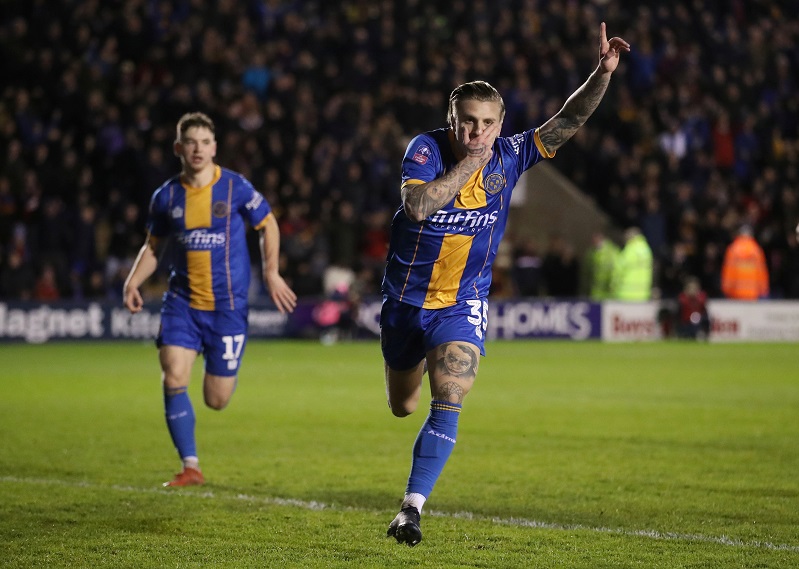 Shrewsbury Town produced a superb comeback to secure a 2-2 draw at home to Premier League leaders Liverpool in the fourth round of the FA Cup.

Liverpool boss Jurgen Klopp changed his entire starting XI from Thursday’s 2-1 victory against Wolverhampton Wanderers, handing starts to the likes of Takumi Minamino, Fabinho, Divock Origi and Dejan Lovren, and it was the visitors who took an early lead in Shropshire.

Spanish midfielder Pedro Chirivella’s superb through ball in the 15th minute found the run of England Under-19 international Curtis Jones, who took one touch with his left foot before placing a composed finish past goalkeeper Max O’Leary.

However, Shrewsbury were creating chances in the first half and Shaun Whalley missed two great opportunities to level the scores, firstly seeing goalkeeper Adrian save his one-on-one effort with his right foot before the striker then dragged an effort wide when driving into the box.

Leading 1-0 at the break, it took the Reds just 30 seconds after the restart to double their lead as Donald Love, under no pressure from any player inside his own box, volleyed into the back of his own net to give the hosts a mountain to climb.

The Shrews should have pulled one back when Callum Lang was played in one-on-one, but his effort was tipped behind by a fantastic save from Adrian, and that proved to be the striker’s last action as he was replaced by Scotland international Jason Cummings.

That substitution turned out to be a masterful decision from manager Sam Ricketts as five minutes later Josh Laurent was brought down in the box by a silly challenge from Yasser Larouci, leaving Cummings to find the bottom-left corner with a composed penalty.

Just 10 minutes later, New Meadow was sent into raptures again as Cummings nutmegged Croatian defender Lovren around 25 yards out from goal before slotting a crisp finish into the bottom-left corner, levelling the scores at 2-2.

Liverpool threw on the big guns late on in the game, bringing on both Roberto Firmino and Mohamed Salah and the latter was denied from close-range by a superb sliding challenge from Ro-Shaun Williams, who had initially made a mistake when failing to clear from inside his own six-yard box.

Shrewsbury managed to hold on for the 2-2 draw and secure a trip to Anfield for a fourth-round replay.