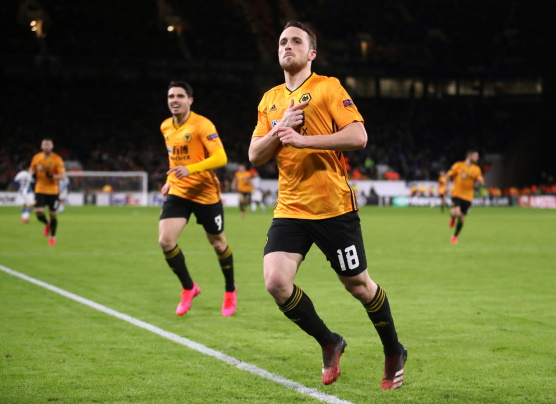 A Diogo Jota hat-trick and a stunning goal from Ruben Neves gave Wolves a 4-0 win in their Europa League clash with Espanyol.

Wolves started on the front foot and opened the scoring inside the 15th minute when Jota volleyed home. The home side won a corner, and Joao Moutinho’s set-piece was met by Raul Jimenez at the near post.

His flick found Jota, whose volley clipped Victor Sanchez before finding the bottom corner. It could have been two four minutes later, but Adama Traore saw his shot saved by Andres Prieto on the edge of the box.

Espanyol refused to lie down though, and they should have grabbed an equaliser when Rui Patricio made a hash of his clearance in the 30th minute. The Portugal international tried to volley Jimenez’ miss-hit backpass away, missing it on two occasions before he denied Facundo Ferreyra with a fine save.

The visitors made a vibrant start to the second half, but they were soon pegged back when Neves did what Neves does best.

The midfielder reacted quicker than anyone after an Espanyol clearance before chesting the ball down and firing his volley into the top corner.

15 minutes later, Wolves made it three when Jota raced onto a throughball from Matt Doherty before drilling the ball home at the near post.

He then grabbed his hat-trick with nine minutes remaining as Wolves countered Espanyol in style. Moutinho played Jota the ball, but the latter did all the hard work as he cut in from the wing and danced past two players before smashing his effort into the far corner.

Espanyol now need a miracle to advance into the next round, while their position in LaLiga remains under threat. After tonight’s performance, Wolves will feel they can get their hands on the trophy.