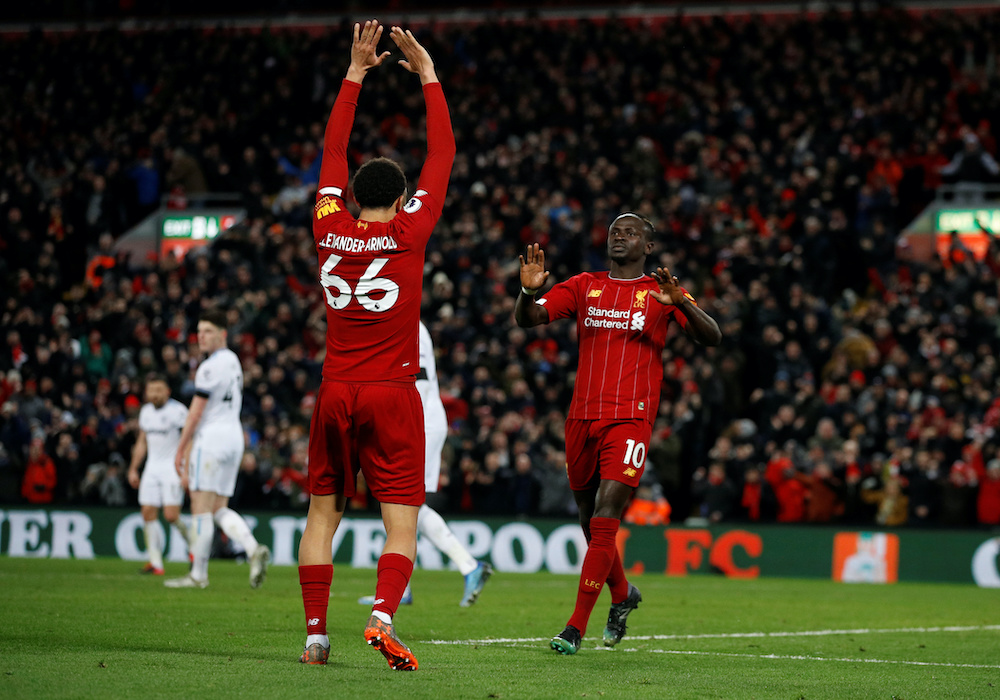 Liverpool were made to work hard for their record-equalling 18th consecutive Premier League victory as they came from behind to beat West Ham at Anfield.

The Reds’ unbeaten record was under serious threat when Pablo Fornals gave the visitors a 2-1 second-half lead, only for Mohamed Salah and Sadio Mane to turn the match in the favour of the champions elect.

The 3-2 scoreline extended Hammers boss David Moyes 16 match winless record at Anfield and keeps the Londoners in the bottom three but the Scot can take the positives from a much-improved showing from his side, while wondering what might have been had his goalkeeper Lukasz Fabianski not made three huge errors.

Liverpool made the best possible start when they took the lead after just nine minutes via Georginio Wijnaldum’s fourth goal of the season. The Dutchman was able to nod Trent Alexander-Arnold’s corner goalwards and past  Fabianski, although the Poland international will be disappointed not to have kept out the header.

Having been on the back foot from the off, West Ham were able to convert their first real opening just three minutes after falling behind. Robert Snodgrass’s whipped corner was met by the head of Issa Diop and Allison was unable to keep it out, despite getting a hand to it.

It was the first league goal Liverpool had conceded at home since early December and stunned the Anfield faithful. Meanwhile, West Ham took plenty of confidence from the equaliser and looked dangerous on the counter-attack for the rest of the half.

The home side had chances to go ahead before the break, Alexander Arnold failing to find the bottom corner with his low effort, while Virgil van Dijk saw a header smack against the crossbar.

A sluggish start to the second half for Liverpool gave Moyes’ side the opening they’d been hoping for and with 55 minutes on the clock, they snatched a shock lead. Declan Rice’s cross found substitute Fornals, and he was able to guide the ball into the far corner.

Jurgen Klopp responded to falling behind by introducing Alex Oxlade-Chamberlain and he nearly crashed in a spectacular equaliser, only for Fabianski to push away the swerving drive.

Having redeemed himself somewhat when keeping out Oxlade-Chamberlain’s effort, Fabianski then gifted Liverpool the equaliser on 68 minutes.

Andy Robertson’s low cross found Mohamed Salah, who shot straight at the Hammers goalkeeper, only to see the ball squirm through his grasp and trickle across the line.

Fabianski was able to keep out a subsequent Salah effort but his save presented a great chance to Roberto Firmino, only for the Brazilian to fail to nod home.

With Liverpool piling on the pressure, a third goal was inevitable and duly arrived in the 81st minute, Fabianski was again caught out as he charged out to close down Alexander-Arnold, only for the England right-back to get the cross in and present Sadio Mane with a tap in.

West Ham had a chance to get back on level terms in the final three miners when January signing Jarrod Bowen was played through on goal, only fo Allison to block his chipped effort.