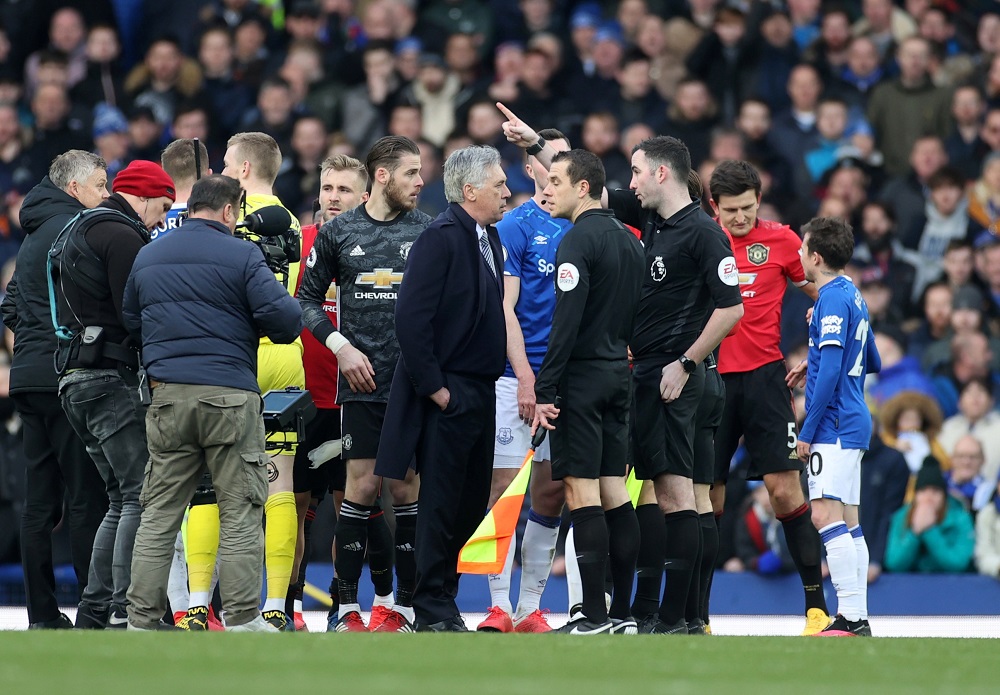 Everton saw a last-gasp strike ruled out by VAR as they had to settle for a point from a 1-1 draw against Manchester United at Goodison Park.

Carlo Ancelotti made five changes to the side beaten by Arsenal, with Theo Walcott, Andre Gomes, Seamus Coleman, Michael Keane and Tom Davies all handed starts.

United made just one change to the XI which started the 3-0 home win over Watford, with Scott McTominay preferred to Daniel James.

The hosts were in front with just three minutes on the clock as United goalkeeper David de Gea hesitated in trying to clear the ball and his eventual effort struck Dominic Calvert-Lewin and rebounded back into the net.

De Gea then had to make a low save to deny Calvert-Lewin, before Nemanja Matic saw a left-footed effort strike the home crossbar at the other end.

Matic saw another effort parried away from danger by Jordan Pickford, before Coleman was forced out of the game due to an injury.

Soon afterwards Pickford was at fault as Bruno Fernandes fired goalwards from just over 20 yards out, allowing the shot to nestle in the back of the net for an equaliser just past the half-hour mark.

Ten minutes into the second half Gylfi Sigurdsson lifted a 20-yard free-kick up and over the defensive wall, only to see his effort strike an upright with De Gea well beaten, with Richarlison unable to convert the rebound.

De Gea then made a decent save as he kept a Calvert-Lewin shot out with his feet, while at the other end Leighton Baines made a crucial interception to prevent substitute Odion Ighalo from being presented with a clear chance.

Heading into the final ten minutes the home side started to increase the pressure on the United rearguard, before the visitors almost snatched a winner as Pickford was forced to deny Fernandes and Ighalo with a fine double save.

The hosts had the ball in the net in stoppage time as Calvert-Lewin fired home via a double deflection, but a VAR check controversially ruled the effort out for offside – due to a prone Gylfi Sigurdsson – and the game ended all-square.