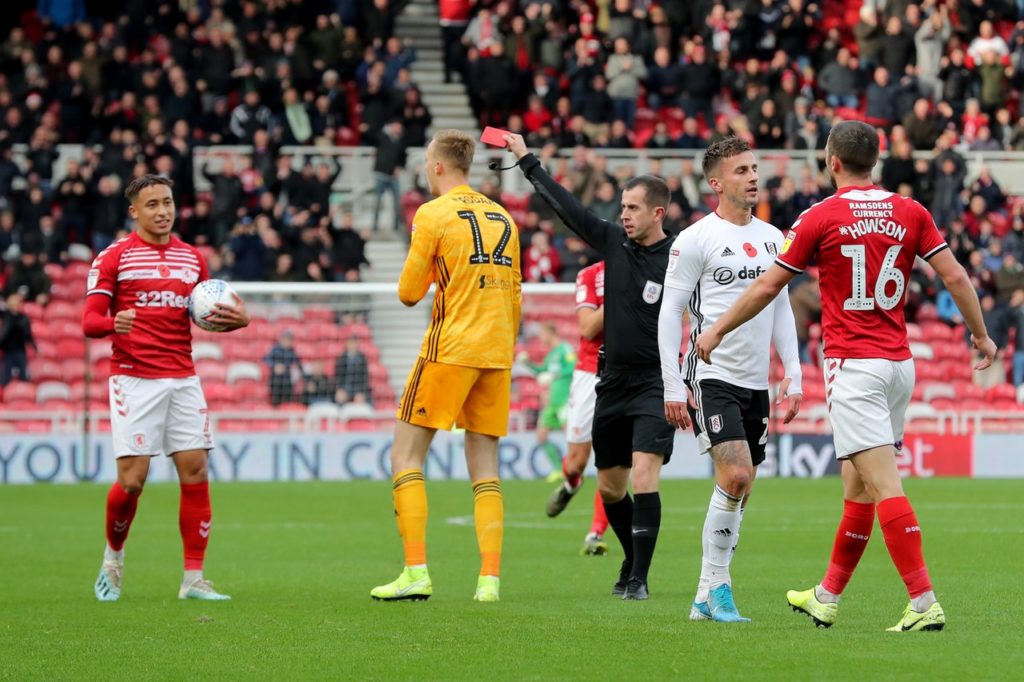 Middlesbrough’s goalscoring problems continued as 10-man Fulham left the Riverside Stadium with a point and a goalless draw.

Boro, booed after the whistle by their fans, dropped into the relegation zone after being unable to find a solution to their lack of goals and poor form despite the Cottagers having goalkeeper Marek Rodak sent off in the 17th minute.

The Slovakian shot-stopper was penalised by referee Peter Bankes for deliberate handball after he misjudged his charge out of his box and Jonny Howson tried to flick the ball over his head.

Despite complaints from Rodak and the rest of the Fulham team, there was no changing Bankes’ decision and midfielder Josh Onomah was immediately replaced by back-up keeper Marcus Bettinelli.

Before that Fulham, looking to climb into the play-off zone, had looked the better side, even though Middlesbrough’s young goalkeeper Aynsley Pears was not asked many questions.

Pears, making his second league appearance since replacing the injured Darren Randolph in midweek, did well to gather when it looked like he might have made a mess of Tom Cairney’s cross that was dropping towards the net.

Apart from another Cairney effort that flew over the bar from distance after Rodak’s dismissal, Middlesbrough created a couple of better chances but lacked confidence in and around the penalty box.

Striker Ashley Fletcher, without a goal since August, wasted the best chance when he fired over after Marcus Tavernier had managed to play him in behind the Fulham defence early on.

Howson probably would have scored had Rodak not intervened when the wing-back was sent clear by the influential Lewis Wing’s diagonal pass.

And Britt Assombalonga, whose only goal since August against Preston was credited to him by the EFL’s dubious goals committee, wasted a free header at the back post when Wing picked him out.

Fulham still looked more dangerous when they got into the final third.

Only Wigan have scored fewer goals than Middlesbrough – who have won just twice this season – in the Championship this term and it showed because they lacked conviction in the final third.

The closest they came in the opening exchanges of the second half was when neither Assombalonga nor Fletcher could turn in Howson’s delivery to the back post.

That led to frustrations growing among the Middlesbrough fans, who got annoyed by a patient build-up play before a wayward Fletcher header from Hayden Coulson’s cross on the hour.

But Fulham striker Aleksandar Mitrovic, fresh from his hat-trick against Luton in midweek, had the best chance when he headed over from eight yards after climbing to meet Joe Bryan’s cross.

Wing did strike the foot of the post with a free-kick from 25 yards but the mood was clearly one of frustration as time and again occasional attacks broke down.

There was also a goalbound Paddy McNair effort that deflected just wide off Alfie Mawson and another from the Northern Ireland international in stoppage time that was straight at Bettinelli as 10-man Fulham survived.