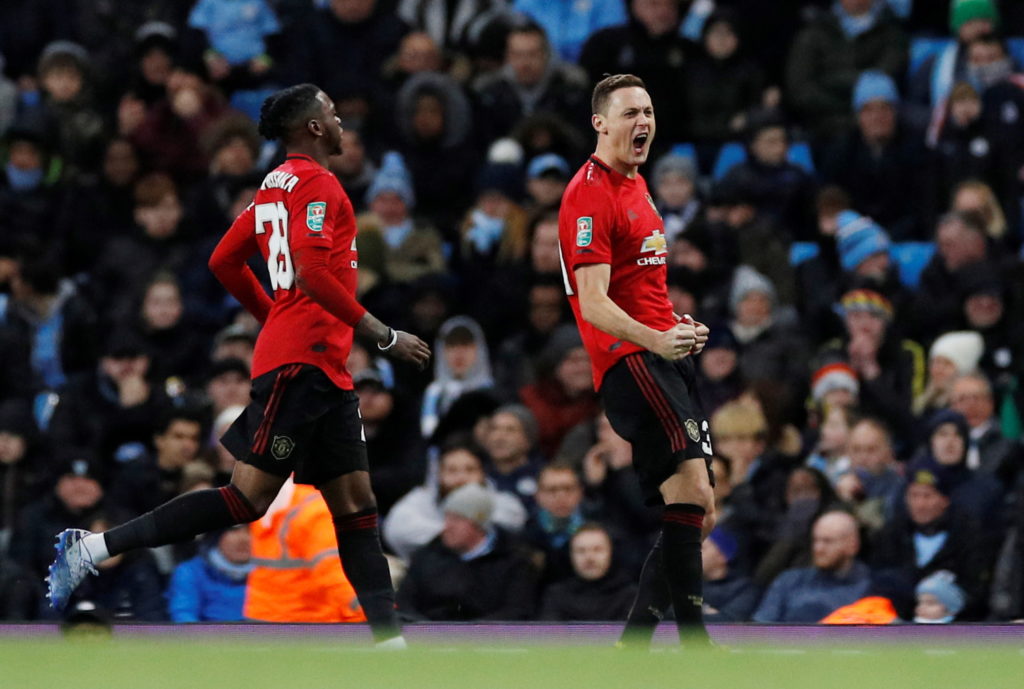 Manchester City lost 1-0 against ten-man Manchester United in the Carabao Cup semi-final second leg but booked their place in the final 3-2 on aggregate.

City held a fairly comfortable 3-1 lead from the first leg at Old Trafford and they looked keen to put the tie to bed as they dominated the opening exchanges at the Etihad Stadium.

Gundogan produced a sublime eighth minute cross for Aguero but the Argentine’s diving header was somehow saved by David De Gea across to his right.

That set the tone for the first half-hour of the contest as De Gea thwarted Riyad Mahrez and then tipped an rising angled effort from Aguero away from the goal, while Raheem Sterling was denied a penalty by the Video Assistant Referee (VAR) after going to ground following a challenge from Harry Maguire,

And, having weathered the storm, United hit City with a sucker punch as they took the lead on 35 minutes when Gundogan could only clear Fred’s left-wing free-kick into the path of Nemanja Matic and he unleashed a low first-time strike into the bottom corner from 15 yards.

City did get the ball in the net on 42 minutes, but Sterling was offside when he diverted Kevin De Bruyne’s low cross into the net from close range and the decision was backed by VAR.

Sterling should have levelled on the night just before the hour mark when he was sent clear by De Bruyne, but he took too long to get his shot away and ended up blazing over the top with three defenders back around him.

Kyle Walker then looked to take matters into his own hands on 72 minutes as he teed himself up from 25 yards, but his swerving strike was punched clear by De Gea.

Moments later David Silva nicked possession off Maguire inside the area, but instead of going for goal himself, he tried to tee up Gundogan which allowed Maguire to make amends with the block.

United’s hopes of finding a second goal to level the aggregate score looked to be over on 76 minutes when goalscorer Matic picked up his second booking and a subsequent red card for pulling back Gundogan.

City again thought they had equalised six minutes from time when De Bruyne played in Aguero and he flicked a right-foot effort into the far corner beyond De Gea, but again the offside flag was correctly raised.

And, despite ending up defeated on the night, it is City who will go to Wembley on March 1 looking to defend their Carabao Cup crown against Aston Villa.