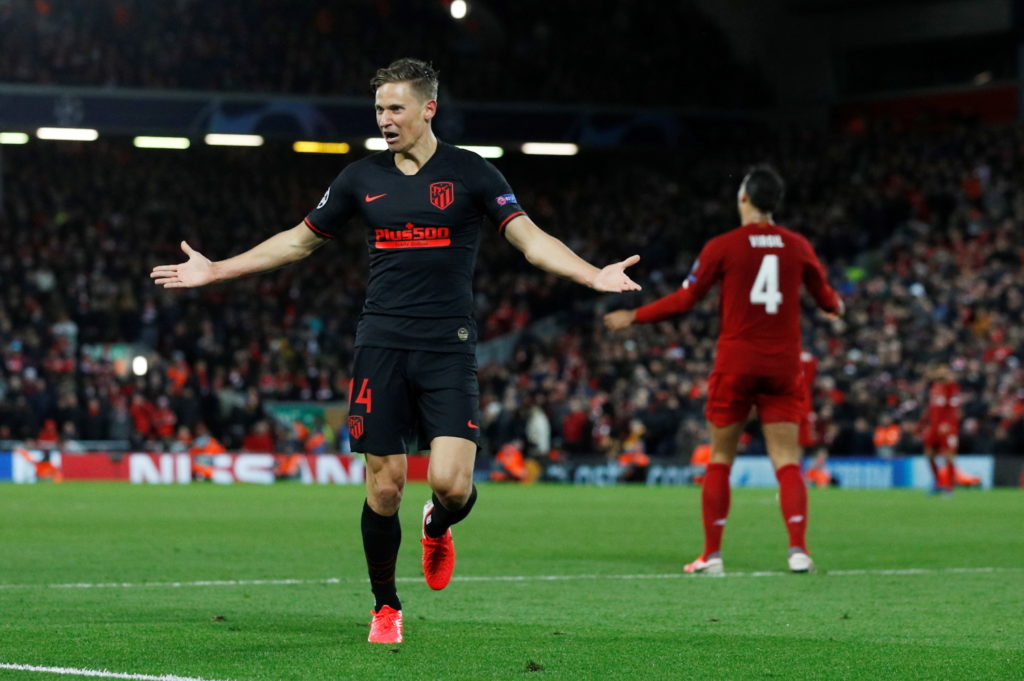 Liverpool crashed out of the Champions League last-16 4-2 on aggregate after losing 3-2 after extra-time against Atletico Madrid at Anfield.

The holders boasted two changes from the 1-0 first leg defeat, with the injured Alisson replaced by Adrian, and Alex Oxlade-Chamberlain came in for Fabinho, who dropped to the bench.

Former Chelsea hitman Diego Costa started for Atletico Madrid, as he replaced Alvaro Morata from the first leg, while Kieran Trippier came in for Sime Vrsaljko and Joao Felix started ahead of Thomas Lemar.

Liverpool had never lost a game against Atletico Madrid on Merseyside, while Jurgen Klopp had yet to lose a home Champions League game in charge of the Reds going into the match.

And Costa tried to start rewriting history in the opening minute when he flashed a strike just wide of Adrian’s near post after being played through by Koke.

Liverpool responded on five minutes when Georginio Wijnaldum stole a yard on his marker to meet an Oxlade-Chamberlain cross but his subsequent header was saved by Jan Oblak.

The hosts cranked up the pressure and Oxlade-Chamberlain tried his luck from just inside the area on 16 minutes, only for Oblak to get down and beat the shot away with Wijnaldum just missing out on the rebound.

Moments later Atletico provided another reminder of their threat in the final third when Felipe met a Koke corner and directed a header inches wide of the far corner.

Liverpool again threatened on 32 minutes when Mohamed Salah won the ball back off Renan Lodi and squared to Sadio Mane who needlessly rushed his effort and Oblak saved at the second attempt.

Roberto Firmino then met a Trent Alexander-Arnold cross on the stretch but his effort was saved by the Atletico custodian four minutes later.

Liverpool got the goal their first half play warranted just two minutes before the break when Oxlade-Chamberlain’s cross from the right was met by Wijnaldum who sent a downward header inside Oblak’s right-hand upright.

Oblak was forced into a couple of early saves after the interval with both Salah and Mane testing him, before he tipped an Oxlade-Chamberlain effort from 30 yards wide of his goal on 54 minutes.

On the hour, Firmino looked set to score when he brought down an Alexander-Arnold free-kick to the back post and looked to send the ball back towards the far corner, but again Oblak was on hand to make a smart save.

Two minutes later, Adrian failed to gather a Joao Felix strike from 20 yards, but regained his composure to block Angel Correa’s follow-up effort, before Saul Niguez tried a cheeky attempt from well inside his own half and watched the ball drop just wide.

Liverpool went very close on 66 minutes when a Salah shot looped towards the back post and Andrew Robertson saw his header rebound back off the crossbar before being cleared.

Mane then had two overhead kick attempts off target as he looked for a spectacular way to settle matters.

The hosts continued to press to try and win the tie in normal time and they almost snatched a winner on 88 minutes when Joe Gomez picked out Salah and he stole a yard on two defenders before firing just over from 15 yards.

It was Atletico who had the ball in the net in the final seconds of injury time when Saul met a Lodi cross and powered a header past Adrian only for the offside flag to deny him.

Liverpool needed just four minutes of extra time to take the lead in the tie when Wijnaldum sent a superb cross into the area and Firmino’s header went in off the post for his first home goal of the season.

However, Atletico responded within three minutes when Adrian’s poor clearance dropped to Joao Felix and he played in Marcos Llorente whose 25-yard effort beat the Spanish shot-stopper.

Llorente virtually booked his side’s passage into the quarter-finals on 105 minutes when he curled a shot beyond the dive of Adrian and into the bottom corner of the net from 20 yards to move them 3-2 ahead on aggregate.

Liverpool needed two goals in the second half of extra time but they failed to muster another significant chance and it was Atletico who snatched a winner on the night with Morata scoring a breakaway goal in the final minute of extra time to send the Spaniards into the last eight.