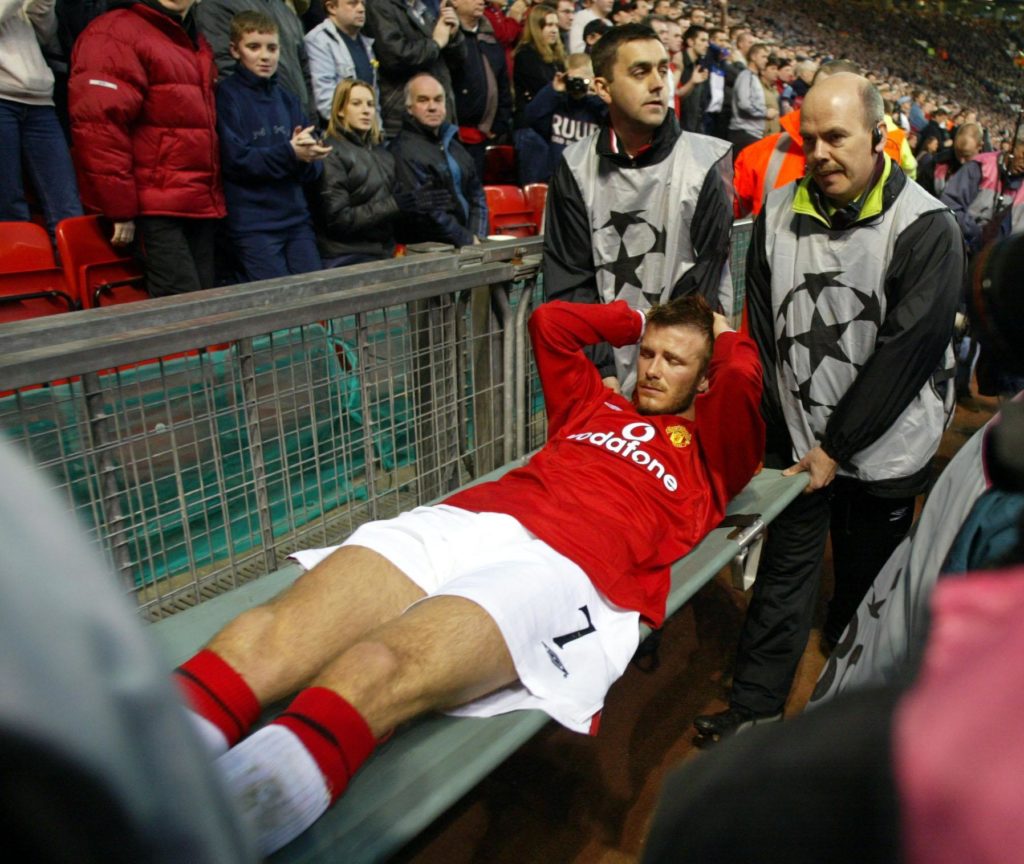 Beckham’s World Cup hopes were hanging by a thread.

Uri Geller, the spoon-bending psychic, urged viewers to put their hand on the TV and concentrate on a foot that was plastered on the front page of the country’s biggest selling paper.

After all, David Beckham, the inspirational heart of the England team, had broken a metatarsal just 36 hours earlier and his chances of making the 2002 World Cup were in jeopardy.

‘Beck us pray’ was the headline accompanying the giant shot of the midfielder’s foot on the front of The Sun ahead of Geller’s appearance on GMTV.

Every other media outlet was also awash with stories about the injury as England’s World Cup hopes looked to have gone up in smoke on April 10, 2002.

A rough, two-footed challenge by Deportivo La Coruna’s Aldo Duscher in the second leg of Manchester United’s Champions League quarter-final sent Beckham flying – and the country into a tailspin.

Taken down the tunnel on a stretcher, United boss Sir Alex Ferguson admitted that Beckham was a doubt for the tournament in South Korea and Japan.

A timeframe of six to eight weeks was put on the injury to his left foot, with the Prime Minister leading the national concern at a Cabinet meeting in Downing Street.

At a session otherwise dominated by the Budget and the Middle East, Tony Blair broke off to tell colleagues that “nothing was more important” to the Three Lions’ World Cup preparations than the state of Beckham’s foot.

The fact the Prime Minister got involved underlined the mania that surrounded a moment that the other man at the heart of it cared little about.

“Because it’s David Beckham and because he is a great player, everything is bigger,” tough-tackling Argentinian Duscher said.

“The media and the public give too much importance to the things that happen around him.

“I don’t need to speak with him about this because if this happened to a player from Deportivo, nobody would care.

“I wish Beckham is healthy for the World Cup. I hope that he can be fit to play in the tournament.

“What happened was unfortunate. I can honestly say that I went for the ball.”

Some even suggested that Duscher had purposely crocked Beckham, given his compatriots were due to face England at the World Cup that summer.

But the Three Lions skipper was able to start the opener against Sweden, albeit patently not yet match-fit after a seven-week absence, and then made a telling contribution against the South Americans days later.

Having even considered quitting the game after being sent off for kicking out at Diego Simeone as England bowed out of the 1998 World Cup to Argentina, Beckham finally buried the ghost by firing the country to a 1-0 group win.

He struck home the 44th-minute penalty and fervently kissed the England shirt as pent-up frustration over that moment and the previous two months evaporated.

But the tournament, like so many, would end in frustration for Sven-Goran Eriksson’s men, with Brazil knocking them out in the quarter-finals.