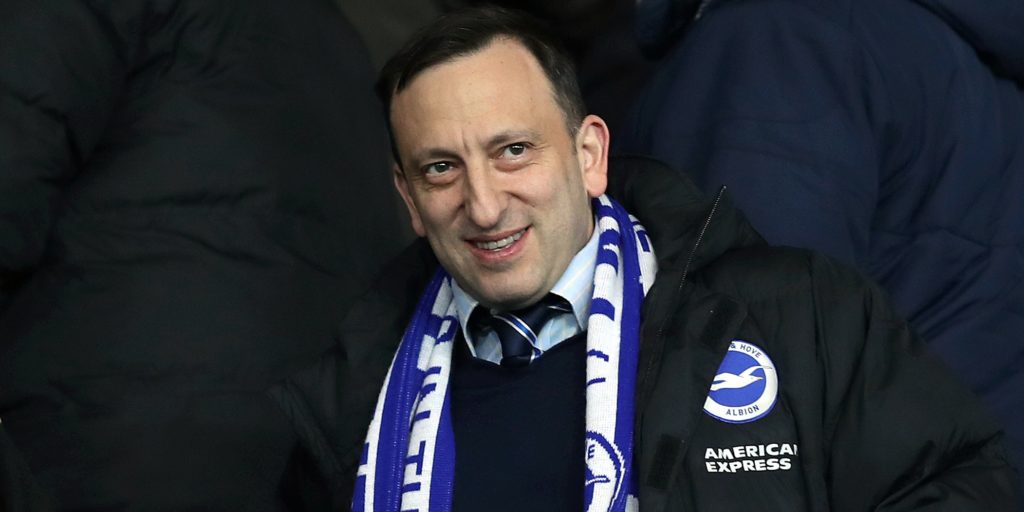 Bloom has called on the Professional Footballers’ Association to look beyond protecting player wages in the short term.

Brighton chairman Tony Bloom believes the crisis caused by the coronavirus shutdown should lead to significant changes in the way football is run.

With several clubs at all levels struggling to cope financially since play was suspended, Bloom said the situation raised questions over the sustainability of a model which sees such large percentages of club revenues spent on player wages.

“After this situation is resolved – and hopefully that doesn’t take too long – I do think football will come together because right now lots of clubs are at risk of going bust,” Bloom said.

Speaking on a conference call, Bloom added: “We were all devastated when Bury went because we know how key clubs are to their communities and it’s a big concern going forward that more clubs in this country and in others will fold.

“It does need to be looked at at all levels. It really isn’t sustainable and it needs something like this crisis to get across some significant change.”

Bloom called on the Professional Footballers’ Association to look beyond protecting player wages in the short term, saying if there cannot be some movement from the players’ union they may find clubs go out of business.

“I think it’s time for the PFA to step up and look at the wider picture,” he said. “There are players with contracts running out soon but also younger players who don’t have contracts right now, and players lower down the leagues – a lot of those clubs literally won’t have money to pay wages in a month or two.

“The last thing we need is for so many clubs to go into administration and maybe not get out of it. There is a wider picture here and the PFA has a wider responsibility.”

Premier League clubs are due to meet on Friday to discuss the next steps, with reports emerging that a growing number are calling for the season to be ended – one way or another – no later than June 30.