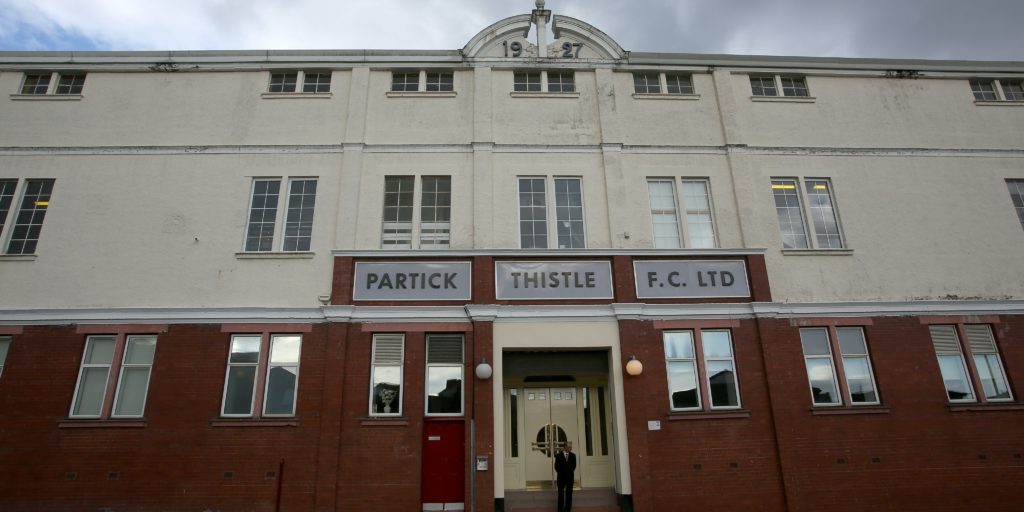 Thistle will be relegated to League One.

Partick Thistle will not take legal action against the SPFL following the resolution to end the season, with Rangers boss Steven Gerrard calling the governing body an “absolute mess”.

Thistle are one of the sides hit hardest by the vote to conclude the Scottish campaign outside the top-flight with immediate effect, as they will be relegated to League One.

They consulted their lawyers, who told them they have got a case, but Thistle have opted against pursuing it in order to safeguard against further financial danger.

A club statement read: “Having taken further legal advice, we have been advised that we have the option to take this before a court. Instinctively, injustice demands reparation.

“However, as a club, the decision to relegate Thistle is first and foremost about our people and what this might mean for them.

“To pursue court action costs money and considerable time – so we have had to consider carefully whether both could be better spent on securing the club’s future and protecting the livelihoods of those we employ.

“In deciding what our next steps should be, that was our first priority.

“If we were to take this action to court, there is a risk that might stop the release of much-needed monies to those clubs on Friday.

“That’s a step too far for us. Regardless of what’s been inflicted on Thistle, we can’t be responsible for pushing even one club to the brink.

“It would be hypocritical of us to have espoused “do no harm” as a reason why we shouldn’t be relegated and then do exactly that.

“Taking all of that into account, although we stand by the legal opinion, the board has agreed that we will not seek “further remedy” against the SPFL in order to overturn the resolution.

“Although we remain at a loss to understand why a decision was taken – at a time when Governments are seeking to support jobs across sectors – that will cause significant damage to Thistle and others.

“Instead, we will focus our efforts and monies on Thistle and look forward, not back. That includes making a positive contribution to the discussions on possible changes to the league structures.”

While Thistle have taken the moral high ground, Gers boss Gerrard has demanded an independent investigation into the SPFL.

Dundee’s switched vote meant their proposals achieved the numbers required for the motion to pass, leading to the early curtailment of the Championship, League One and League Two campaigns with final positions settled on a points per game basis.

The league board also have the power to call an early end to the Ladbrokes Premiership season using the same system, meaning Celtic would be crowned champions once again.

Rangers have railed against the SPFL’s plans from the outset and on Saturday claimed to have evidence “that raises serious concerns” about the league’s actions, with the club calling for chief executive Neil Doncaster and legal adviser Rod McKenzie to be suspended.

The Ibrox giants demanded an independent investigation into the process surrounding the vote and manager Gerrard has echoed that request.

“Certainly, my stance is I let the suits carry on doing what they’re doing. I think that’s their job to continue to represent Rangers from that way.

“But, from afar, the SPFL looks an absolute mess, in all honesty. I’m watching ex-players, pundits, I’m reading media and it’s getting absolutely battered from pillar to post, the way its handled things, certainly in the last couple of days.

“From my point of view, I think all I ask is for the main leader of the SPFL to show some real leadership in this time.”

Hearts would be relegated from the Premiership if the SPFL board eventually decides to end the top-flight campaign following a vote that has left chairman Ann Budge “disillusioned and bitterly disappointed”.

In a lengthy statement, Budge, who will lead a task force looking at a potential restructuring of the top-flight with Hamilton chairman Les Gray, underlined her belief that “the whole process has been incredibly badly handled and shows Scottish Football in a very poor light”.

“I have said from the outset that it was imperative that we find a solution that ensures no club is penalised by relegation in a situation where the leagues cannot be finished. The financial consequences are enormous. Many others agree with that view.”