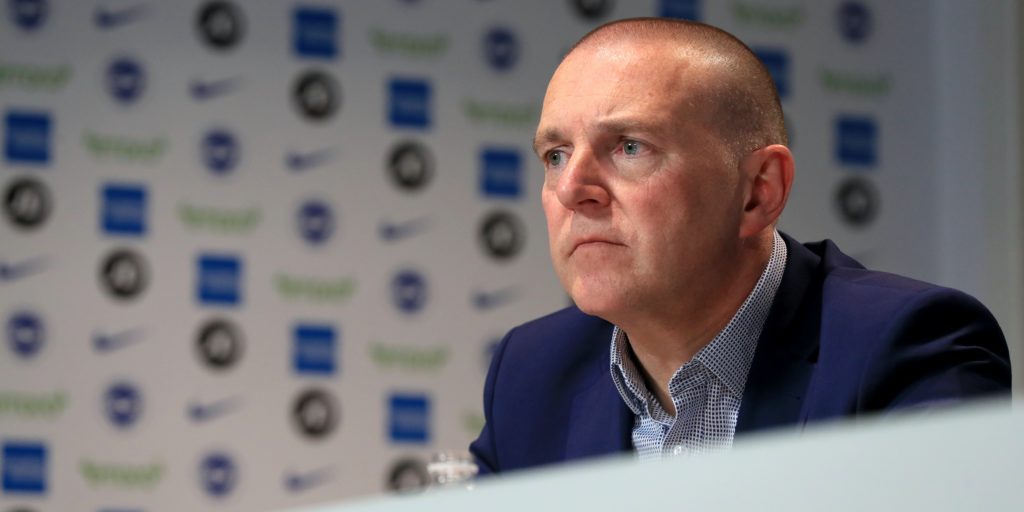 Earlier this month Burnley warned they stood to lose £50million if the season could not be completed.

Brighton have warned of a “significant strain” on owner Tony Bloom financially if it is not possible to finish the Premier League season.

A mooted cut-off date of June 30 for completing fixtures was not discussed on a conference call between top-flight clubs on Friday following reports that nine clubs were pushing to draw a line under the campaign by then.

Brighton are not in favour of that outcome, adamant they want to find a way to play out the season even if that keeps Graham Potter’s side, two points above the drop zone, at risk of relegation.

Chief executive Paul Barber warned Brighton were already budgeting for a loss this season after investing in the squad, and would struggle if there was a significant loss of broadcast and matchday revenue on top.

“Of course if we could guarantee we would be in the Premier League next season then that is a good thing but we have also got a financial gap that is going to be very significant,” he said.

“We are already relying hugely on Tony to fund the gap we would have had and budgeted for.

“To be able to fund another gap is a significant strain on anyone, let alone one individual, so from that point of view we do want to play out the rest of the season.

“We want to protect and preserve as much of our income as we possibly can as that is our best way of preserving jobs and our best way to sustain our football club.”

Earlier this month Burnley warned they stood to lose GBP 50million if the season could not be completed.

Barber said Brighton’s own figures were different but the losses would be “very significant” if no further play is possible.

“We are trying to protect Tony because we are not a club with multiple large shareholders with huge numbers of people willing to pick up those losses.

Potter joined other senior staff at the club – including Barber – in taking a pay cut at the start of April to help alleviate the costs.

After Premier League-wide talks with the Professional Footballers’ Association broke down, the club is continuing to speak to the first-team squad through senior players Lewis Dunk and Glenn Murray.

Barber said talks were positive and the players want to help, but warned the situation is more complicated than it first appears.

“It’s very easy to think of a squad of 25 players as a homogeneous group but they are all at different stages of their career and financial life cycle and will all have different issues and concerns,” he said.

“The players are very aware of public perception. I understand from outside it doesn’t look great that there’s not more rapid movement but equally I know from the inside it’s a lot more complicated than it might seem or than indeed some people think it should be.”