On This Day in 2013: Luis Suarez causes outrage by biting Branislav Ivanovic 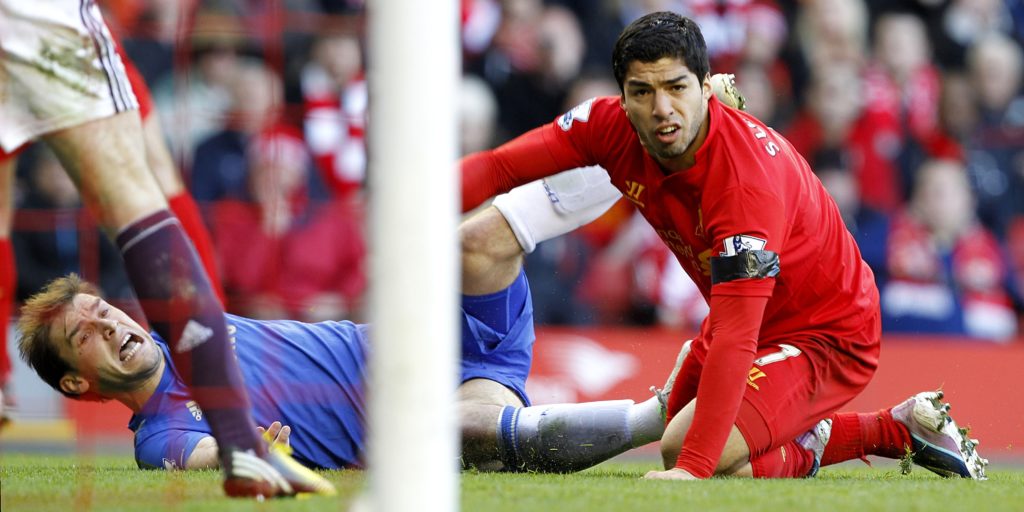 Suarez had already found himself in hot water for biting PSV’s Otman Bakkal when at Ajax.

Luis Suarez further tarnished his reputation on April 21, 2013 when he bit Chelsea’s Branislav Ivanovic while playing for Liverpool.

Here, the PA news agency takes a look back at the incident and the significant fall-out of it.

Suarez had already found himself in hot water for biting as when he joined Liverpool in 2011 he was serving a seven-match ban for biting PSV’s Otman Bakkal when at Ajax. He first disgraced himself at Anfield in his first full season when he was found guilty of racially abusing Manchester United defender Patrice Evra. Suarez admitted he had used an offensive word, but insisted in Uruguay it was an endearing term. The striker was handed an eight-match ban, but that was not the end of the drama. Liverpool received heavy criticism after their squad wore t-shirts in their support of Suarez, who then refused to shake Evra’s hand next time the two clubs met, sparking a fiery encounter.

The Uruguay international had just given a penalty away in the Premier League clash with Chelsea that allowed the London club to go 2-1 in front. Soon after, perhaps frustrated, Suarez was grappling with Ivanovic in the Chelsea penalty when he inexplicably sunk his teeth into his opponents shoulder. Ivanovic went down in pain, but the incident was missed by all the match officials and there was no VAR to call on. That proved a massive point of contention as Suarez stayed on the pitch and scored an equaliser deep into injury time. The television cameras did catch it, though, so there was no escape for Suarez, who received widespread condemnation, including from then Prime Minister David Cameron. The Football Association sent the case to an independent panel, who imposed a 10-game ban on him, ending his season.

When he returned to action in September of the following season, Suarez let his football do the talking and scored 31 goals in 33 appearances as Liverpool challenged for the title. That form earned a big-money move to Barcelona in the summer of 2014 but, before he could get to the Nou Camp, there was yet more disgrace for Suarez. Playing for Uruguay in a group game against Italy at the 2014 World Cup, it was a case of old habits dying hard as the striker clashed with Giorgio Chiellini and again resorted to biting his opponent. That proved to be the end of his tournament as FIFA slapped a four-month suspension on him.