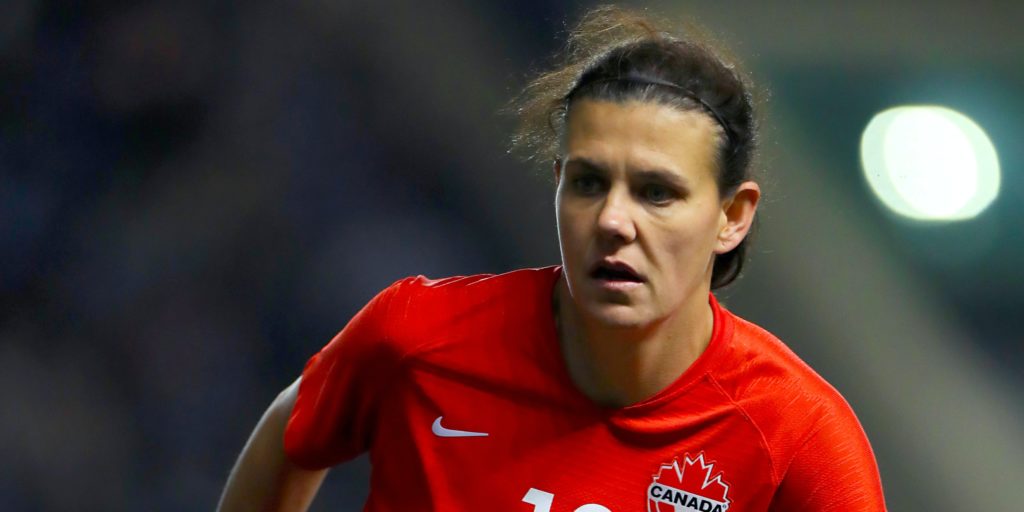 Several players on the list notched a century of international goals.

Christine Sinclair became the top goalscorer in international football history earlier this year as she moved to 185 goals for Canada with her brace against St Kitts and Nevis.

The 36-year-old is certainly among the all-time greats of the women’s game. Here, the PA news agency looks at 10 such players.

Canada skipper Sinclair, whose record goals tally currently stands at 186, has made 296 appearances for her country. She has featured at – and scored in – five women’s World Cups, which included helping the Canadians achieve their best finish of fourth in 2003, and has two Olympic bronze medals.

Hamm was international football’s highest scorer herself – with 158 goals – when she brought her illustrious career to an end with retirement in 2004. One of women’s football’s most well-known figures, the forward starred in the United States’ World Cup triumphs of 1991 and 1999, won Olympic gold in 1996 and 2004 and claimed the first two FIFA women’s world player of the year awards, for 2001 and 2002.

There are a number of other World Cup-winning Americans who could be on this list – including Abby Wambach, who succeeded Hamm at the top of the scoring list before being surpassed by Sinclair, Carli Lloyd, hat-trick hero in the 2015 final, and Michelle Akers, who netted 10 times during the 1991 campaign. Lilly, part of the ’91 and ’99 successes and also the Olympic glory of 1996 and 2004, has the distinction of playing more international games than any other footballer – an incredible total of 354, in which she scored 130 goals.

Brazil superstar Marta is another record holder – with 17 across five editions, the 34-year-old has scored more World Cup goals than any other player. Seven of those came at the 2007 tournament as she took the Golden Boot (and Golden Ball) and the Selecao finished as runners-up. After the team’s last-16 exit at last summer’s World Cup, Marta – named FIFA’s world player of the year six times and a two-time Olympic silver medallist – made a memorable, emotional address to Brazilian girls in a post-match interview, saying with tears in her eyes: “The future of women’s football is depending on you to survive.”

The team that beat Brazil in the 2007 final was Germany, retaining the title they won for the first time four years earlier, and in both tournaments Prinz was the star of the side. She scored seven goals in the first campaign as she landed the Golden Boot and Golden Ball, and then notched five in the second, during which she was captain. Prinz – also a World Cup runner-up in 1995 aged 17 and a five-time European Championship winner – was world player of the year for 2003, 2004 and 2005.

Prinz’s team-mate Angerer was second-choice goalkeeper behind Silke Rottenberg at the 2003 World Cup before playing in all six of Germany’s matches for the 2007 success – and registering a clean sheet in each of them. Her effort in the final included keeping out a Marta penalty. Angerer became captain after Prinz retired in 2011 and in 2013 when Germany won their sixth successive European Championship, she saved two spot-kicks in the final against Norway. Six months later she was named world player of the year.

When Germany were succeeded by Japan as world champions in 2011 it was Sawa’s tournament. She captained the Japanese to glory and took both the Golden Boot and the Golden Ball, with her five goals including an extra-time equaliser in the final as the United States were held 2-2 and then defeated on penalties. The world player of the year award followed for the midfielder, who also was part of the squad that were runners-up in 2015, and claimed Olympic silver in 2012.

Riise helped Norway win the World Cup, the European Championships and Olympic gold during an international career that ran from 1990 to 2004. The triumphant World Cup campaign in 1995 saw the playmaker score in the final against Germany and end up with the Golden Ball. That was four years on from being a beaten finalist when the Norwegians were defeated by the USA.

While China’s Sun fell just short of winning the World Cup, with the team beaten on penalties by the USA in the 1999 final, she took the Golden Ball award for the tournament and shared the Golden Boot with Brazil’s Sissi, having scored seven times. The forward was also in the side that was runner-up to the US at the 1996 Olympics.

A star from a very different era was Parr, who played for the famous Dick, Kerr Ladies team – which was renamed Preston Ladies – in the early 20th century and is said to have scored around 1,000 goals. The St Helens native’s time with the team included featuring in one of the earliest recognised women’s internationals, in which the Dick, Kerr side representing England beat French opposition 4-0 in 1920. While the Football Association banned women from playing on its member grounds in 1921, Parr continued to play for the team until 1951. In 2002, she was the first female player to be inducted into the National Football Museum Hall of Fame, and last year a bronze statue of her was unveiled at the museum.