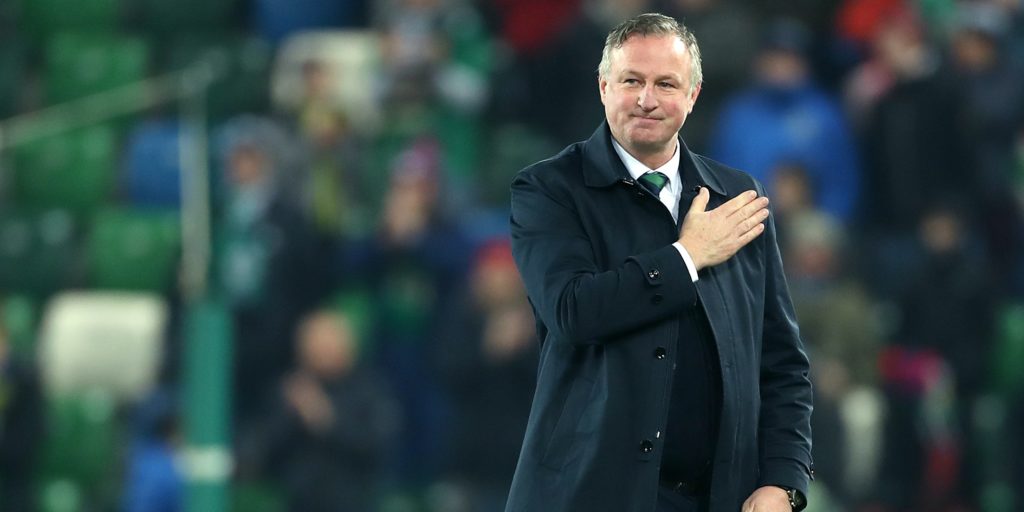 Coronavirus pandemic means the 50-year-old is stepping down from the role.

Michael O’Neill has stepped down as Northern Ireland manager after eight and a half years in the role.

O’Neill, who was appointed Stoke manager in November, had been due to take charge of Northern Ireland’s Euro 2020 qualifying play-offs before leaving the national team, but a proposed revisal of the international match schedule due to the coronavirus pandemic has led to his early exit.

“After careful consideration and following discussions with the Irish FA I feel it is only fair that now is the right time for me to step aside,” O’Neill said.

“I would have loved the opportunity to manage Northern Ireland in the UEFA 2020 play-off game versus Bosnia and Herzegovina and the chance to qualify for another major tournament, but the current situation means that this is no longer possible.”

The announcement brings to an end a hugely successful spell in charge for O’Neill, highlighted by the Green and White Army’s trip to Euro 2016 – their first appearance at a major tournament since the 1986 World Cup.

Appointed in December 2011, O’Neill had a win rate of 36 per cent in his 72 games in charge, and won 18 of the 48 competitive matches he oversaw for Northern Ireland.

Irish FA chief executive Patrick Nelson said: “It is within a unique set of circumstances that we bring our unforgettable chapter with Michael O’Neill to a close.

“His time as manager, as well as chief football officer at the Irish FA, will be remembered as some of the headiest for our fans and most successful for our players.

“We were all looking forward to having Michael back to lead the team in March for the game against Bosnia and Herzegovina, but, for obvious reasons, it simply wasn’t to be.”

During a video conference between 55 member associations on Tuesday, UEFA proposed rescheduling the play-off matches – originally due to take place last month – for October, after the opening matches of the Nations League in September.

O’Neill had a long-standing wish to move back into club management, which was granted last year when Stoke asked him to lead their fight against relegation.

He won 10 of his 23 games in charge of the Potters, steering the club to 17th place – three points above the drop zone – prior to the suspension in play.

O’Neill had previously said that while he had no problem juggling his roles with Stoke and Northern Ireland during the relatively quiet international period over the winter, he would not be able to do it when matches are due to come every few weeks in September, October and November.

Although it has been known for some time that he would be moving on, no successor has yet been named.

Before the pandemic forced the postponement of Euro 2020 until next summer, the possibility had been held open that O’Neill might have remained in charge should Northern Ireland qualify.

“It was important to leave the association and team in the strongest possible shape in order to not only have the best chance of qualifying for Euro 2021, but allow the new manager time to build upon the success that we have had during my eight-year tenure,” O’Neill said.

“Throughout my time here, I have been fortunate to have worked with many great coaching, medical and support staff who have all contributed to our successes and shared in some great moments.

“As for my players, past and present, I would like to thank them all for an overwhelming level of commitment and professionalism that has helped to deliver so many unforgettable highs and great experiences for us all.

“I would also like to thank everyone at the Irish FA who have made the job a wonderful experience and especially Patrick Nelson (CEO), Leslie Caul and Gerry Mallon (IFA chairmen), Jim Shaw and David Martin (IFA presidents) who have always been a great source of support.

“Finally, to the fans, thank you. It has been an honour and an enormous privilege to have had the opportunity to manage my country and I will treasure my time as manager of Northern Ireland forever. The support you have provided myself and the team over the years has been incredibly humbling.”