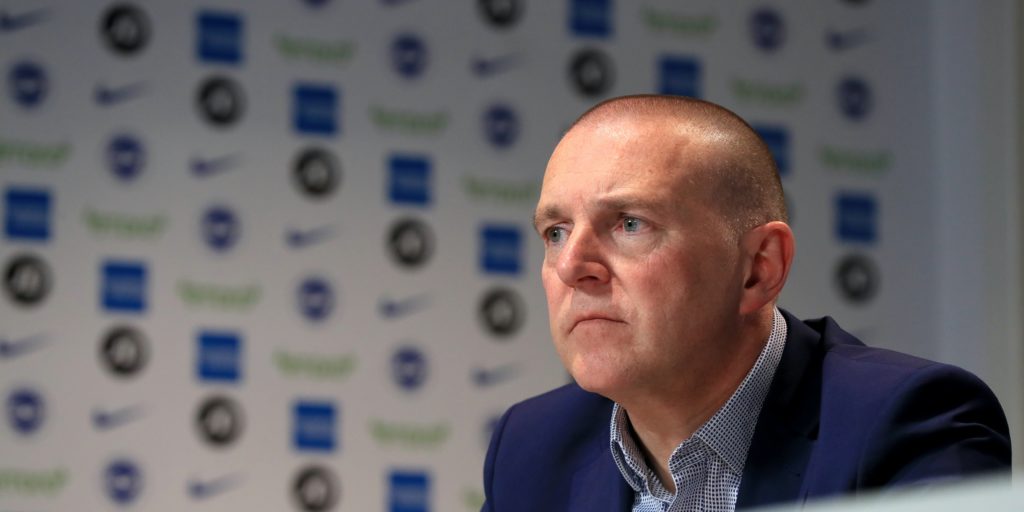 Brighton chief executive Paul Barber has revealed his club are preparing to start playing again in June, but admits there is no scheduled agreed to complete the Premier League season.

Top-flight clubs will meet again next week where they will discuss the prospect of playing the remaining games of a season that has been halted by the coronavirus pandemic.

It is accepted that any resumption would be behind closed doors but the league are still in the hands of the Government as to when it is safe to start playing again and that is before any issues such as player testing, TV coverage and scheduling are discussed.

Still, Barber – who says Brighton’s players will need a four-week period to return to match fitness – is planning for a June restart.

“I think we are still in a holding pattern, we have got another Premier League meeting in a week’s time when we will have chance to discuss the latest information from the Government and I think we will see where we are then,” Barber said.

“(Manager) Graham (Potter) and (technical director) Dan Ashworth are getting the players back together again in the first week of May (on a conference call), with a view of potentially beginning to play some time in June. But these are lines in the sand as opposed to definitive schedules.

“We haven’t really talked in specific detail about the schedule because it is almost impossible to do so.

“There are so many variables in there. When will the lockdown be lifted? If a lockdown is lifted, what will social distancing look like?

“There are so many variables that football clubs can’t answer.”

UEFA told its members on Thursday that any qualification to its competitions next season should be decided on sporting merit.

That means that if the campaign cannot be completed without impacting the next one, the Premier League must come up with a way to decide its final table.

Barber is not wanting to think about that just yet, but accepts it might have to happen.

“That’s a very difficult question. We are not at that point yet,” he said.

“We are very determined to try and find a way to finish the season for all the reasons that we’ve discussed many times before. At the moment that is our main focus, our priority. That’s what we want to be able to do.

“But we keep adding the caveat, and we have to add the caveat, that we can only do that when it’s safe to do so.

“We also have to add the further caveat that there will come a point where we may have to confront the kind of scenarios you are talking about.

“But we’re not there yet and we’ve been very focused on making sure that we exhaust every possibility of playing out this season.”