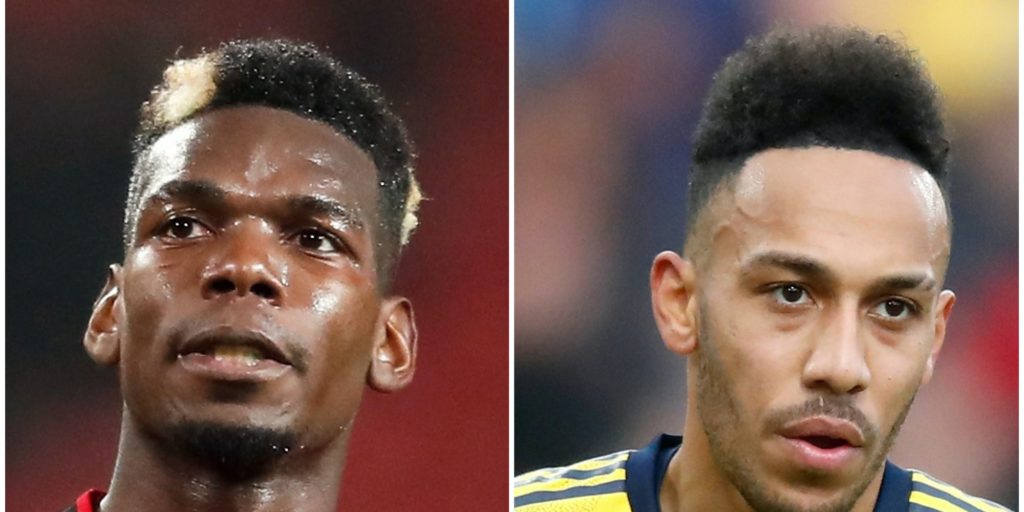 Is there an end in sight to Paul Pogba’s saga in the north-west?

Paul Pogba could finally be leaving Manchester United. The Daily Mail cites Calciomercato as reporting Paris Saint-Germain have made a bid for the 27-year-old, who has another year to run on his contract. The offer to United by the Ligue 1 giants includes “big money” as well as two wingers in Argentina’s Angel di Maria, 32, and Germany international Julian Draxler, 26. What makes the offer somewhat strange is that Di Maria flopped at Old Trafford and was sold to PSG after just one season in 2014-15.

The Daily Mirror reports that Pierre-Emerick Aubameyang‘s father appears to have urged his son to sign a new contract with Arsenal. The Gabon captain has just a year left on his contract in north London and has been linked with moves to United, Chelsea, Real Madrid and Barcelona. Aubameyang’s father has seemingly taken charge of the situation, posting a picture of his son signing his first contract with Arsenal in 2018 with the caption: “You know what you have to do bro”.

He had been linked with a return to Old Trafford but The Sun, citing Italian outlet Tuttosport, says Cristiano Ronaldo has vowed to remain at Juventus. The 35-year-old is contracted in Turin until the end of the 2021-22 campaign yet days ago an unnamed director at a top European club said he would “not be surprised” if the Portuguese returned to United. That has been dismissed by Tuttosport which says Ronaldo does not intend to leave Juventus as he has an “excellent relationship” with the club.

Leicester are edging closer to signing Lille’s Victory Osimhen, reports the Mail. The Foxes have been scouting the 21-year-old striker as a replacement for Jamie Vardy but fear his asking price of GBP 60 million is too high, leading to speculation the Nigeria international could instead head south to Inter Milan or Juventus. Osimhen has also attracted interest from Everton, Chelsea and United.

Thomas Partey: Arsenal will have to qualify for next season’s Champions League if they want to afford the 26-year-old Atletico Madrid and Ghana midfielder, according to the Daily Express.

Jadon Sancho: Speculation continues that the England winger, 20, is heading back to Manchester to sign with United but Teamtalk says Borussia Dortmund are confident they can convince him to stay in Germany.