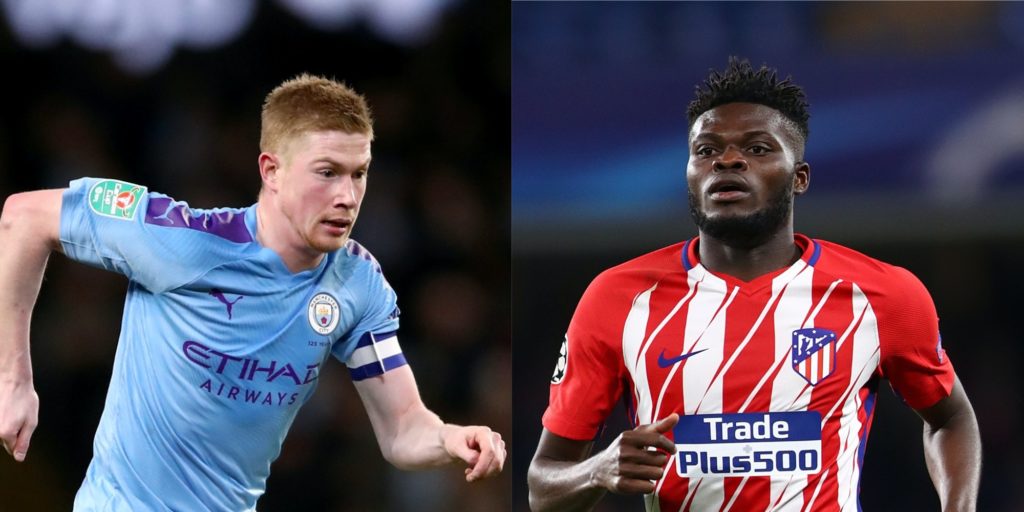 Kevin De Bruyne is set to have contract talks over his clouded future at Manchester City once the season has been completed, according to the Daily Mail. The Belgian, who turns 29 next month, has said he might have to consider his future if City’s two-year Champions League ban is upheld. Real Madrid and Paris Saint-Germain are just two of the clubs keeping tabs on the situation.

Atletico Madrid’s Thomas Partey has said he is keen on a move to Arsenal and is hoping for a deal involving a trade for Alexandre Lacazette, The Daily Telegraph reports. The 26-year-old Ghana international is said to be eager to prove himself in the Premier League, and was known to be on Gunners boss Mikel Arteta’s wish list before football closed down. Partey has a release clause of around GBP 45million.

Mesut Ozil could be on his way to Turkish side Fenerbahce, The Sun reports. The 31-year-old German, who is of Turkish heritage, has been linked with several moves away after showing sub-standard form in recent seasons, but his GBP 350,000-a-week salary has been a deterrent to other clubs. Ozil has reportedly told his mother he would play for Fenerbahce one day.

Manchester United are favourites to sign Sunderland 16-year-old Joe Hugill, the Manchester Evening News reports. Arsenal and Tottenham are also in the hunt for the exciting striker, but United are said to be close to signing him for GBP 300,000. Several German clubs have also expressed an interest, but have made no firm offers.

Liverpool and Inter Milan are reportedly still mulling making a move for RB Leipzig striker Timo Werner. The Guardian says Liverpool have told the 24-year-old’s representatives they need more time to decide on an offer due to doubts in the football market caused by the coronavirus. Italy’s Tuttosport says Inter Milan could make an offer involving a trade with Valentino Lazaro, who is currently on loan at Newcastle.

Ismail Jakobs: The 20-year-old German defender is a target for Leicester, though they may baulk at the GBP 9million rating put on him by FC Koln, the Leicester Mercury says.

Joe Hart: The ex-England and Manchester City keeper could be on his way from Burnley to Leeds United, according to Football Insider.

Neymar: The Brazilian wans to return to Barcelona from PSG and is happy to take a 50% wage cut, according to Mundo Deportivo.