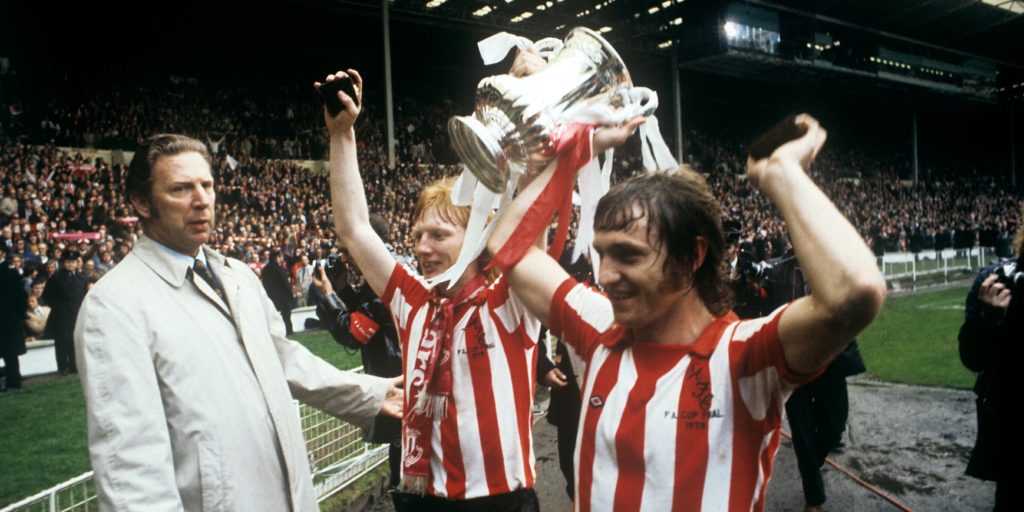 Ian Porterfield scored the only goal of the game.

Sunderland defied the odds to beat Leeds in the FA Cup final on May 5, 1973.

Ian Porterfield scored the only goal of the game while Sunderland goalkeeper Jimmy Montgomery made a string of spectacular saves as the Second Division Black Cats toppled Don Revie’s high-flying Leeds.

Here, the PA news agency looks at five classic cup finals since then:

Brian Talbot’s strike inside the first quarter of an hour and Frank Stapleton’s header on the stroke of half-time put the Gunners in the driving seat. As the match meandered into the closing stages, there was little indication that this showpiece would be fondly remembered in the years to come but three goals in the last five minutes changed all that. Gordon McQueen bundled home before Sammy McIlroy’s superb solo effort drew United level in the blink of an eye only for Alan Sunderland to slide in the winner for Arsenal from the superb Liam Brady’s cross.

Unfancied Coventry produced one of the great FA Cup final upsets. Things seemed to be running to form when Clive Allen headed Spurs ahead after just two minutes but Dave Bennett equalised almost immediately. Gary Mabbutt got the final touch as Spurs went back ahead before the break but Bennett crossed for Keith Houchen to make it 2-2 with his famous diving header. The Sky Blues clinched it in extra time when Mabbutt diverted a Lloyd McGrath cross into his own goal.

In 1986, the Reds beat their Merseyside rivals in the FA Cup final with Ian Rush scoring twice. History repeated itself three years later but Everton proved sterner opposition at Wembley. Against the backdrop of the Hillsborough disaster only five weeks earlier, John Aldridge’s fourth-minute goal seemed a decisive moment but it proved a mere footnote after Stuart McCall levelled with the last kick of the game. Into extra-time and McCall once again equalised after Rush’s strike but there would be no third comeback after Rush headed home in the 104th minute.

The FA Cup waved goodbye to the Millennium Stadium, which had played host to the final for six years, with a breathtaking match which saw West Ham come within seconds of landing silverware. The Hammers were two up thanks to Jamie Carragher’s own goal and Dean Ashton and, although Djibril Cisse and Steven Gerrard struck either side of the interval, Paul Konchesky’s effort looked like being the winner. However, into added-on time, Gerrard drove home from 30 yards and in the penalty shootout Pepe Reina saved Bobby Zamora, Konchesky and Anton Ferdinand’s spot-kicks.

Arsenal came from 2-0 down to win a dramatic FA Cup final in extra-time with a goal from Aaron Ramsey to end their nine-year wait for a trophy. Hull had earlier stunned the Gunners at a sun-baked Wembley as they went 2-0 up inside eight minutes through James Chester and captain Curtis Davies but Arsenal reduced the deficit through a superb 30-yard free-kick from Santi Cazorla. Laurent Koscielny levelled in the 71st minute before Ramsey drilled in a loose ball from the edge of the penalty box.