Home News Partick Thistle claim to have been ‘forgotten, ignored and patronised’ by SPFL

Partick Thistle claim to have been ‘forgotten, ignored and patronised’ by SPFL 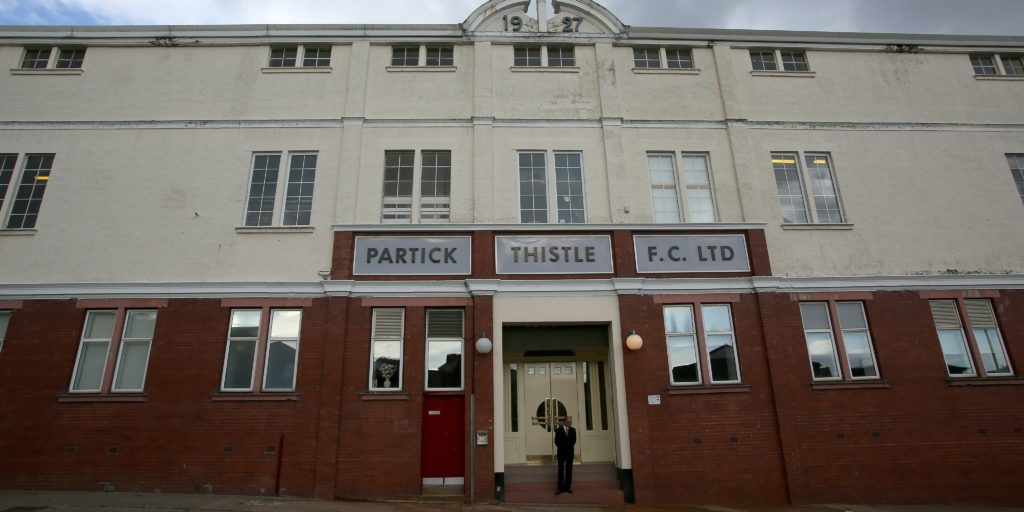 The club currently occupy bottom place in the second tier and have met the effective confirmation of their demotion with fury.

Partick Thistle have issued an angry response to the Scottish Premiership’s dismissal of proposals to restructure the football pyramid, claiming the club have been “forgotten, ignored and patronised” by the SPFL.

A task force had been commissioned to consider a revamped three-division system following the cancellation of the 2019/20 season at Championship level and below, but was disbanded after a meeting of top-flight clubs on Friday ended with insufficient support for the project.

Plans for the top two leagues to swell to 14 teams would have allowed Inverness and Falkirk to earn promotion as runners-up in their respective divisions, while allowing those in the relegation spots to retain their current status.

Partick Thistle currently occupy bottom place in the second tier and met the effective confirmation of their demotion with fury, echoing a previous statement by Falkirk chairman Gary Deans.

A club statement read: “The Partick Thistle board is deeply angered by the decision to halt league reconstruction…it is hard to see this a considered decision about reconstruction, it smacks more about the settling of scores within the Premiership.

“The way that this news was made public before clubs affected by the decision knew – and before they could inform staff and players – was a disgrace.

“Yet again we were left to pick up the pieces due to thoughtless, selfish behaviour that showed no regard for fellow clubs. Speaking on behalf of the group of Premiership clubs, Aberdeen FC chairman Dave Cormack said: “The strong feeling of the group was that we must focus all of our energies on emerging from the crisis we face”.

“This is patronising nonsense. Is Mr Cormack suggesting that no clubs in other leagues have considered what’s happening to Scottish football? If so, that is disrespectful and offensive.”

The club went on to overtly call into question the role of the Scottish Professional Football League, which has been contacted for comment by the PA news agency.

“We accepted an invitation to join the Reconstruction Group task force. We did so in good faith, despite our initial misgivings that it was not a genuine attempt to address the problems created by a hasty end to the season, after assurances from the SPFL,” the statement added.

“The SPFL has fallen way short in this undertaking. Last week, we wrote privately, at length, to the SPFL to raise our concerns that their actions were making it harder to bring Scottish football together and could jeopardise the prospect of reconstruction.

“Our treatment is unprecedented in Scottish football. During this pandemic, across sport, efforts are ongoing to actively try to prevent damage, yet our governing body inexplicably chose a different path. It has singularly failed in its primary duty of care to a member. We have been forgotten, ignored and patronised while senior figures, for reasons best known to themselves, have scuppered a potential solution that did the least harm with no regard to the plight of those who have been betrayed for a second time.

“This is a sad indictment on those who govern our game and the clubs who think this is acceptable, especially when some of them may be in our shoes one day.”

There followed a thinly veiled suggestion that the club could withdraw future administrative support from those it feels wronged by.

“We have been supporting a number of different committees set up to help the SPFL/Scottish FA and clubs to overcome this crisis,” it read. “We must now reconsider whether our participation in these committees are the best use of club and staff resource at a time when we must put our football club first.”