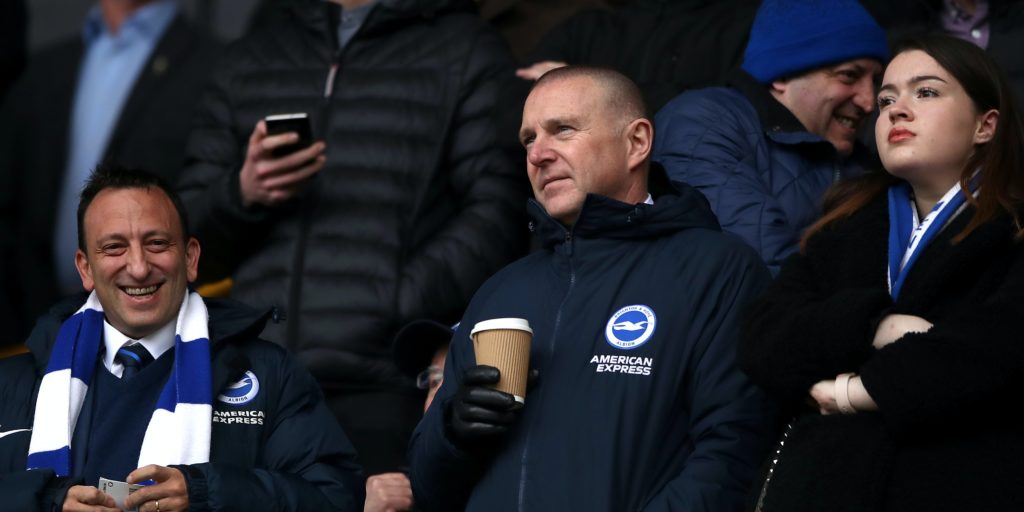 Brighton chief executive Paul Barber has confirmed a third player at the club has tested positive for coronavirus.

The unnamed player will go into 14-day isolation while he recovers from the virus.

The PA news agency understands the rest of the Brighton squad will continue to train as they have been doing during the lockdown, both at home and in solo sessions at the club’s training ground.

Two other players, whose names have also not been revealed by the club, contracted the virus earlier in the pandemic. They are understood to have since recovered but it is not clear whether or not they have returned to training yet.

“Despite all the measures we have all been taking over the last few weeks, when the players haven’t been involved in taking any significant training at all, we have still suffered another player testing positive for the
virus.

“There are concerns and I think it is normal for all clubs to have those concerns. We want to make sure we do all that we can that the protocols that are put into place are safe and secure and mitigate the risk.”

The news comes ahead of Monday’s crunch Premier League meeting, where clubs are expected to vote on Project Restart’s plans to complete the season at neutral venues.

Brighton have been vocally critical of that idea, insisting that the campaign should be played out on a home-and-away basis.

The PA news agency understands that is the only issue of the planned resumption that Brighton are against and want the chance to secure survival on the pitch.

It is understood they are against the idea of the current sides occupying the bottom three – Norwich, Watford and Aston Villa – being relegated if the season cannot be completed.

The Seagulls have received criticism for their vocal stance but Barber insists all clubs will act with a degree of self-interest.

“People will accuse us of self-interest, I totally understand that, but at this stage of the season there is self-interest at every level of the table,” he added.

“Everyone has different objectives for the season and we are all looking to play out the season, if it is safe to do so.

“We really do want to play and we want to make sure the competition stays as fair as it can be despite these exceptional circumstances that we are facing.”

The news of the third positive test comes as Seagulls technical director Dan Ashworth has called for players’ safety to be on top of the agenda at Monday’s Premier League meeting.

“The safety of players and staff is top of that list, everyone’s working hard to minimise risk for those groups,” he told the club’s official website.

“The most important thing is safety, then you can look at the whole thing and discuss how it can all look, it’s about putting together the pieces of the jigsaw once we have a better idea of what the plan looks like.”

Aston Villa and Watford have joined Brighton in speaking out against plans to play the remaining 92 games at neutral venues and it is sure to be a point of contention.

But Parish hopes clubs can unite.

“There are no easy answers, we have to work through it as a collective and I think we will and come out with a consensus in the end,” he said on The Andrew Marr Show.

“(The meeting) is another part of the journey in trying to get football back. We would be derelict in our duty if we did not find a way for the game to come back.

“It may prove beyond us, we have huge challenges in order to get it back to complete the season but we are planning on doing so.”